It only took us 7 weeks to get out west, but we finally made it to meet Cousin SG and visit Uncle I and Aunt M. We were leery of the LONG roadtrip, but much to our surprise the boys did really well not only going, but coming home as well. We did the trip in under 5 hours both times. Not too shabby and almost makes me have less fear of road trips for the future.

Thursday morning JSL and I were busy, busy, busy. We left the house early and went to get new tires put on my car. While they did that we went on a cold walk to Toys R Us and the book store. We bought a new bib for JSL to eat solids that can just be wiped off and a few other things. By the time we got back to the tire store they were done and we were on our way to BJ’s. Here I  bought baby essentials – diapers and wipes. Then we went home where I panicked about not being packed and needing to pick NHL up. JL called and said he was heading home. He went to get NHL at school and then picked up a quick lunch. By the time they were home I was packed and ready to go, after eating.

We were packed up and on the main road at 2:40 and got to our destination at about 7:30. NHL was so happy to see Uncle I and Aunt M. Cousin SG was sleeping in her swing when we arrived. NHL forgot how tiny babies can be since JSL has grown so much in 6 months. SG is 4 months younger so she has lots of time to catch up.

My parents and grandmother arrived about an hour after we did. At this point it was WAY after NHL’s bedtime. We all stayed up to hold SG and talk for a while. Then we finally settled on sleeping arrangements and made beds. NHL slept on a mattress on the floor with my parents. My grandmother had her own room with a bed. JL and I were on our queen sized Aerobed in SG’s room, where JSL slept in her crip. That left Uncle I, Aunt M, and SG (along with Cousin Zoe cat) sleeping in their room. NHL was SO overtired he was still up long after midnight. He finally crawled into bed with my parents and was so giggly.

Here are photos soon after everyone arrived with SG:

Here are some photos of JSL sleeping in SG’s room:

The next morning we got up, took turns in the shower and eventually went out to lunch. We had thought about going to Chuck E Cheese, but NHL was not cool with that. Instead we went to Dave & Buster’s. We do not have one of these by us and it was amazing. Many of us had a yummy salad. After eating NHL went with Uncle I, Papa, and JL to play some games. Then they traded in tickets for a prize. (I so wish I had taken my camera out, but I did not think about it at the time.) Then it was time to head back to the house to rest before the big night at temple for SG’s naming.

Here are the babies after the adventure: 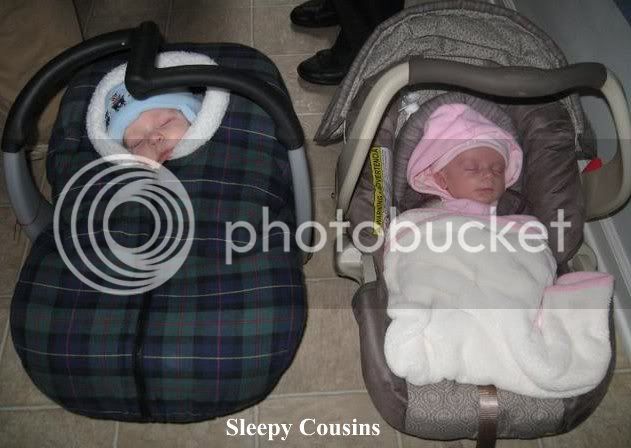 Uncle I & Aunt M relaxing for a few moments before the big night:

SG was also kind and let her "big" cousin JSL share her favorite swing. JSL really enjoyed it. Here is a photo of him in it and some with Mimi.

NHL refused to nap and it was NOT a pretty scene. We all helped to get ready for the Shabbat dinner before temple. Aunt M’s family came over and by 6:45 we were out the door to temple. The service started at 7:30 and they did the naming quickly. The reason to do the naming at the start was that Friday night also was Kristallnacht so there was a lot for the rabbi to talk about.

We did not take any photos of anyone at the baby naming (just do not feel right doing that in a temple). Here are some photos of NHL from various times: 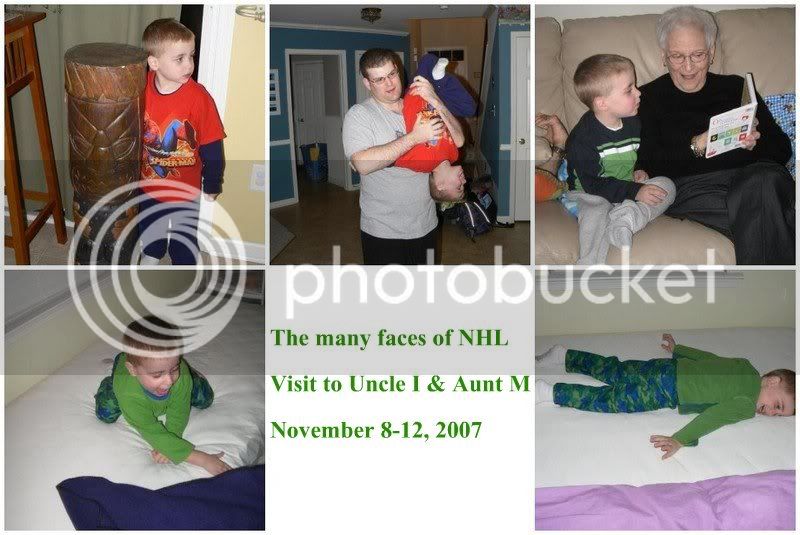 Saturday we slept a little later. Nobody really got moving. We finally decided to head out to lunch and came up with a GREAT place that I wish we had near here. We went to Great Northern Pizza. NHL had macaroni and cheese pizza! After a delicious meal we opted to head back to nap some before going to Chuck E Cheese with Aunt M’s cousins. NHL said he wasn’t tired. When we pulled into their driveway BOTH kids were asleep. We transfered NHL into his bed and he had a nice nap.

Aunt M went to her family to check out the little ones because they were not feeling so great. We all opted not to do Chuck E Cheese. We decided to head to the mall that had a special something for NHL. We shopped and let NHL go on this once to keep him VERY happy:

We went back to the house for a fun dinner. By the time we got home I was suffering from a really bad earache. I thought it was my allergies (very allergic to cousin Zoe cat) or wind in my ear. By the next morning I felt even worse. *sigh*   I felt so bad exposing everyone, but who knew? Of course I should have since someone always gets sick when we go there to visit    *wink*

And of course Saturday night was also the night that we learned how many people can fit into a bathroom. SG had her bath and the troops all watched as previously blogged.

Sunday morning came way too quickly and it was time to do kid photo shoots and pack up. Here is the photo shoot of just the cousins. As you will notice SG slept through the entire thing. 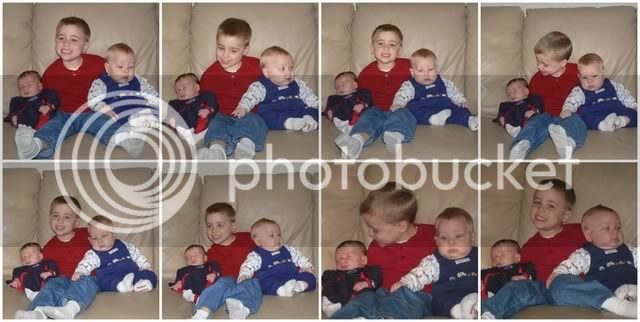 Then while I was pumping milk for the road my grandmother wanted a photo with all of her great-grandchildren. I did not witness this – DARN (note the sarcasm). These are JL’s photos:

We were on the road at 10:40 and back home before dinner. Now I am catching up on all of the laundry from the weekend after being sick.