Is it OVER yet?

How sad is it that I am saying this after only one ice storm and our first real snow event of the season?  GAH!

This morning the snow began to fly just before 11:00. JSL was in his crib sleeping peacefully (thank you MOOricle) so I went out to my car to clean it off and move it up. The white nasty stuff was coming down quicker than I was able to get it off my van. *sigh*   As I was out there flipping out about getting NHL at 1:00 my father called. He was going to suggest to pick him up NOW since he had heard the roads were already bad. This was just 30 minutes into the storm and about 1 inch on the road.

So I cleaned my car off, scooped up JSL and went to pick NHL. His teacher was really nice and brought him to meet me at the door so I did not have to take the sick monkey out of he car. Poor NHL did not have his boots and wiped out on the way into the house. This stuff is powdery and slick. We are home warm and safe and just have to wait for JL to get in later on. He has a nice size trek to get here. With any luck he will be out a little early to avoid the major mess.

They are saying that we may receive 4-8 inches this storm.

Yes, you read that right. We are getting an even larger storm coming Saturday night and all day Sunday. ICK! I am ready to pack it up and move to Florida to be closer to Disney World NOW!

Here is a photo of the white stuff as of 1:30 this afternoon. 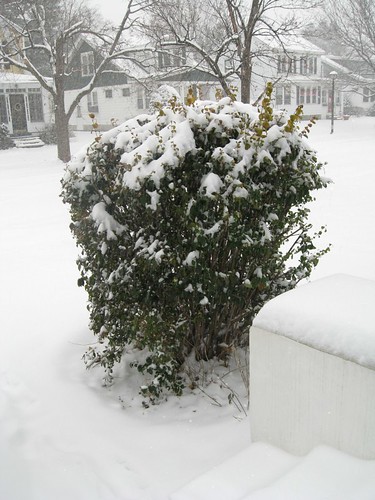 And now here is one of the Chanukah decorations in the window: 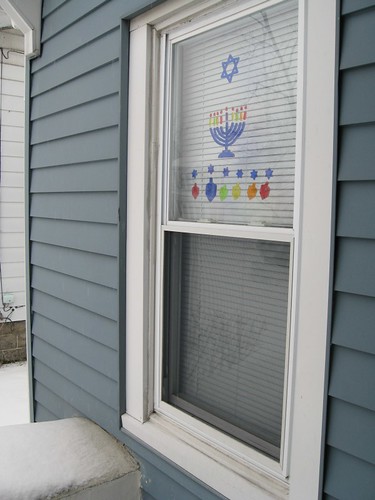 Updated storm photos to follow later. Now I just hope we can stop the ice damns from forming on our roof and flooding the inside of the house.