Typically, temperatures in November get quite chilly here. Lows are usually in the 30’s and highs could climb into the 40’s. It is certainly not the type of weather that one would take their child to the park for an extended length of time. The temperatures have soared to highs in the 60’s the last few days. Thanks to this, I took JSL to the park yesterday. It was just the two of us for an hour or so and we had a fabulous time. Every day, he has been begging me to take him to the park to go "Wheeeee" on the slides. It was so nice to be able to grant him this simple desire.

When we arrived at the park, he bolted away from me. Usually when we are at the park, JSL follows his big brother around. It was so fun to watch and see where he would go on his solo mission. 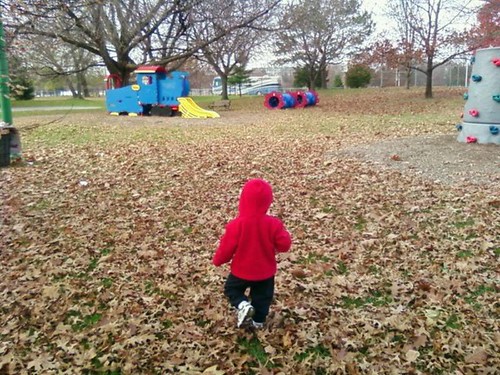 Of course, my camera was in the car . . . so I used my new cell phone to snap some of our precious memories. There was no way I could rip the little guy away from the park to go and get my camera. They may not be the best, but they certainly capture the moments. After he let go of my hand, he made a beeline for the little train slide. 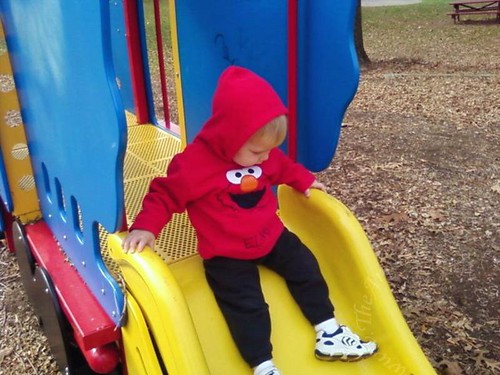 Once he did this a few times, JSL was ready to run to the bigger slides. Over and over again, he climbed up the ladder. Why go up the easy steps when you can give Mom gray hairs? He would stop on the bridge area to jump a few times and look through the bars to laugh at me. 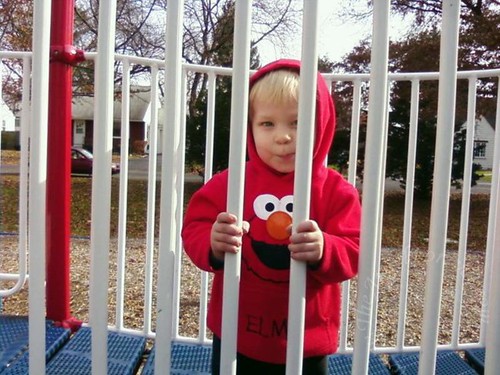 Then he would go over and over to the big twisty slide. JSL had no fear since the playground was empty and loved the freedom to pick what he wanted. 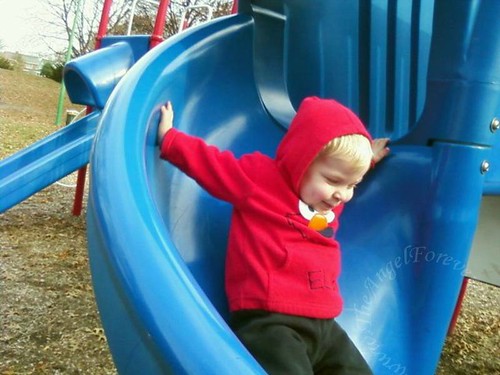 After a few times down the twisty slide, I convinced him to try the tunnel to another section. He hesitated, but then realized he could play peek-a-boo with me. He kept going over and over and of course I kept missing him. He was too fast and thought it was funny that I was getting bad "cheese" (= photos to a 2 year old) over and over. Eventually I got this which is a big favorite of mine. 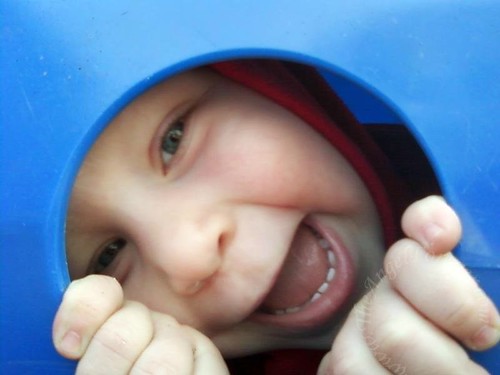 Soon, JSL decided it was time to check out more of the park. On our way, I noticed there was a single tree that actually had leaves on it. The tree was gorgeous and a vibrant red color. I went under it and took the following photo. 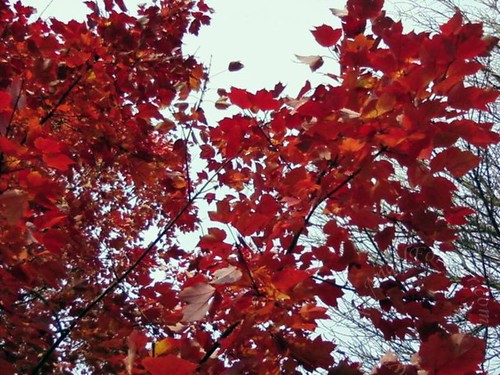 Then it was time for JSL to channel his inner dinosaur. He needed a boost to get up. Once he was on the dino, he was roaring and rocking out. He had a great time, but quickly wanted to move to more things. 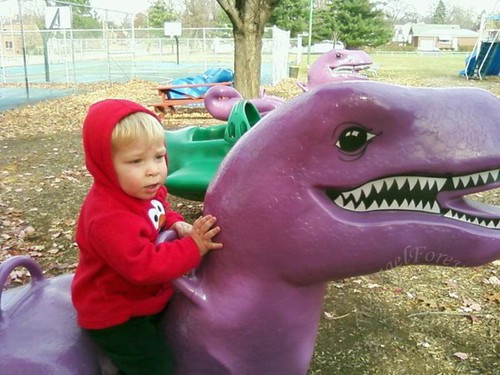 I was shocked he did not want to go on the giant slide at this point. Instead, he picked the "round and round wheee" ride as he called it. This did not last too long. In an attempt to grant me even more gray hairs, JSL kept letting go and trying to stand up while it was moving around. 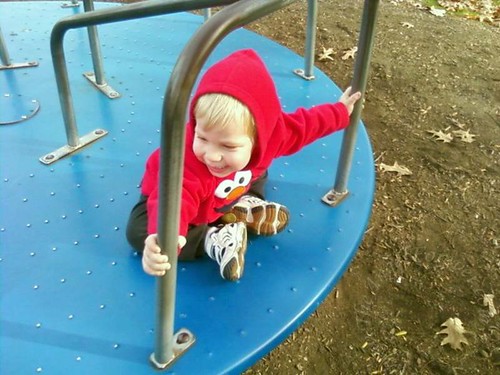 I was able to convince him to follow me to the swings. He wanted to go on the regular ones, but those are not made for a two year old little boy. I put him into the swings for kids that look more like odd contraptions and he could not see anything. I tried to take a photo, but had used up my cell phone memory (oops!). This seemed like the perfect time to call it a day. I told JSL it was time to head home. We only had an hour to eat lunch before it was time to head to school to pick up NHL.

The weather is supposed to be mild again today, but not as sunny. Perhaps we will have another adventure in the park together. It is days like this that I remember why I am so lucky to be a stay-at-home Mom!