In February, NHL’s school had a tribute to Michael Jackson for Black History Month. For months, the kids practiced songs by The King of Pop. On the day of the event, it was amazing watching the kids sing, dance and enjoy what they had learned with those of us in the audience. Thanks to this, NHL (6) has an appreciation for another genre of music. He has actually asked to hear more of Jackson’s songs and I will oblige since it is the music I grew up with.

When I was asked to review Reach Out by Human Nature, I jumped at the opportunity. It looked like something my family would like and would continue to let my boys get associated with Motown classics. 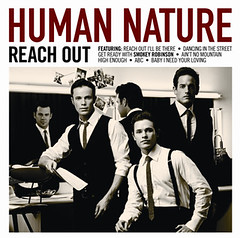 More about Human Nature (from their Press Release):

Australia’s most popular & successful vocal group, Human Nature release their first album – Reach Out in the U.S. on September 1st.  Reach Out is being released exclusively via Barnes & Noble physically and will be available widely digitally.  The album will be released to all retailers physically on March 2, 2010.

Since they signed with Sony in 1994, Human Nature have earned 23 Platinum Awards in their native Australia and have toured throughout the world.  Their largest audience was at the Sydney Olympic Games in 2000 where they performed before 4 billion viewers worldwide.  The band has had 17 Top 40 Hits and Five Top Ten Hits since 1996, has opened tours of Asia and Europe for both Michael Jackson and Celine Dion , and have won several Arias (Australia’s version of the Grammy’s) and virtually every other major entertainment award that country has to offer.  Their last four releases in Australia have reached #1 on the charts there!

Now Human Nature has set their sites on America. 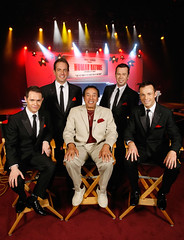 Human Nature are launching their assault via a headlining run at The Imperial Palace Hotel & Casino in Las Vegas, in a show presented by their mentor & friend Smokey Robinson.   The show, billed as “The Ultimate Celebration of the Motown Sound” is running now through May, 2010.   During their run, the boys will also be performing  select  dates in key US markets around national media and promotional activities.

Reach Out is a collection of songs from their last three studio themed recordings in tribute to some of the best songwriters  and performers in Motor City  – it is a tribute to the  renown recording  studio  and record company that brought the sound of young America to the world.   In Reach Out, Human Nature – Toby Allen, Phil Burton, Andrew Tierney,and Michael Tierney  -pay  loving  tribute to the sounds that influenced their global success, and bring an infectious energy and their amazing vocal talents to the proceedings.

Here is one of their videos to check out:

For more on Human Nature head on over to the following websites:

Our thoughts about Reach Out:

I decided to take the CD into the car when we went for a ride the other day. That meant I had a captive audience with the two boys (6 and 2) and hubby. We popped it in and started. I will not lie, JSL (2) protested. He did not want to listen and was demanding to hear Wiggles. His little demands and mini-tantrum were not given into. We were going to listen to Human Nature and not the usual Aussie kids music. NHL (6) asked about the songs. He wanted to know what they were. We told him they were a group from Australia singing Motown music that is very popular in the United States. He was cooperative and willing to listen.

Of course, NHL was a fan of the CD the minute he heard what track #9 was. That would be ABC and was one of the Michael Jackson songs that he performed at his school assembly. My kiddo shocked people at Disney when he belted out each and every word of this song at a party that we attended. Sure enough, when the song came on in the car he was singing and dancing in his seat. He loved it and kept asking to hear it over and over again. As I sit here and type this up now, my little guy is begging to hear ABC over and over – so we have another kiddo that is enamored with this song.

Not to worry, we did not simply listen to ABC over and over. We only did that 4-5 times that afternoon! We continued on with the entire CD. TechyDad and I noted that the songs are reminiscent of the classic Motown feel, but updated some. Several of the songs have tempos that are a bit faster and beats that are a little more bold. We both enjoyed it a lot. Even NHL wanted to explore some of the other songs and will dance along with them when we play the CD in the house.

I really enjoyed Reach Out by Human Nature and will be on the look out for more music from this bright and shining group from Down Under.

Thanks to Sideways Media, one lucky reader will be able to win their very own Reach Out CD. 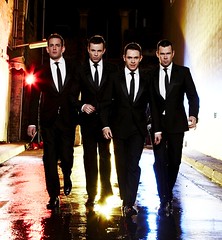 To enter, please follow the rules above within the comment section. Contest starts today and ends at 10:59 EST on April 25, 2010. I will do my best to get the coupons to you in time for Easter, but sadly can not guarantee this. You do not have to be a blogger to enter, but must leave a valid e-mail address for me to contact you for mailing address once the giveaway is over. I will select the winner using random.org and contact you via e-mail. You will have 48 hours to claim the prize. If there is no response, another winner will be selected. Open to U.S. and Canadian residents only.

Disclosure:  I received the CD complimentary of  Sideways Media to facillitate this review. No other compensations was given. The opinions expressed in the review are my own feelings about the product that my family tried. The giveaway is also made possible thanks to Sideways Media.