As a lifelong Disney fan, one of the fun parts of being a parent is taking your children onto rides for their first time. When we went in May 2009, NHL was in kindergarten and JSL turned two on the trip. Thanks to this, there were items that the big kiddo was able to go on, but I often stayed on the sidelines with JSL. We walked a lot as he was napping in the stroller. I was able to bribe NHL to go on Space Mountain last year with me for his maiden voyage. Unlike the great Figment bribe from my childhood, I knew what we would offer him.

When we went to Disney in April, JSL hit a growth spurt before we arrived and was tall enough to go on a bunch of new rides. One evening, when Animal Kingdom was open for a party, JSL decided to be brave and go on Dinosaur. NHL will not go back on this since he went at about JSL’s age. Nana, Papa, JSL, and I went on the ride together. JSL was excited to try a big kid ride and go with all of us. Of course, when you see the PhotoPass picture, you can tell he was a bit, –er freaked out by entire situation. 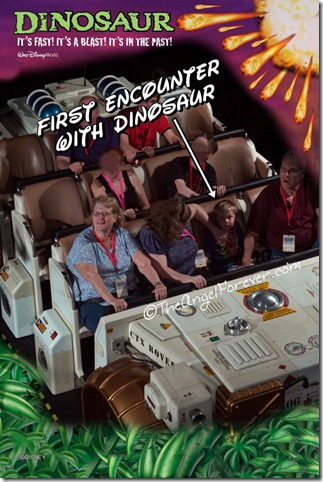 Thank goodness he did not have nightmares from the ride. Of course, JSL was less than eager to try more new to him rides after this. So when it was time to get onto Splash Mountain, he pulled items from his memory bank. He recalled when NHL and I were stranded on the ride the year before (and we did get stuck shortly on this trip). Eventually we got him to agree to go on as a family and it was captured below: 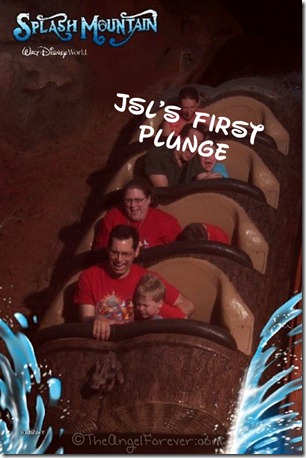 Why yes, NHL is hiding his head not to get wet. I am laughing at JSL asking when the drop is going to happen. Not sure what the deal is with TechyDad, but JSL is closing his eyes. So thrilled to have these magical moments to remember.

What first time Disney ride moments do you remember from your childhood or with your own children?

This post is part of the fun over at Super Jenn and her Monday’s Magical Moments Meme. To join in the fun and link up, head on over to the linky there