Tis the season where boys and girls all around will be thinking about the holidays that they celebrate. Of course, it can also be a time where children start to question why they may not celebrate something that a friend does. My youngest entered kindergarten in the fall with a large appreciation for being Jewish because he went to a religious nursery school program for two years. Although many of his classmates would observe Christmas with their families, the classroom only did crafts, activities, and stories about Chanukah. This year will be very different and he will learn a lot about other customs and celebrations. 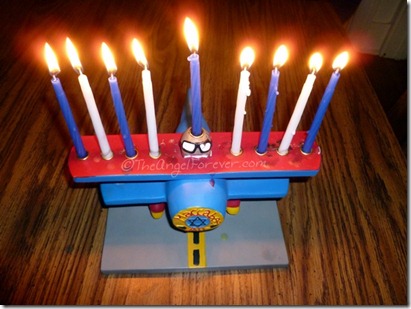 A school project for the kindergarten kids is to make “Family Holiday Banner” to share with the class. Each member of the family has to participate and represent their favorite part of the holiday within a traced hand. Then, around the banner, the child needs to add items that would tell more about the traditions our family enjoys during the holiday season.

This made me wonder: Will JSL come to me this year and ask why we don’t celebrate Christmas like the majority of his classmates? Perhaps it will be, but luckily we already had something like this with NHL and I wrote about it for a former project that I am including below. 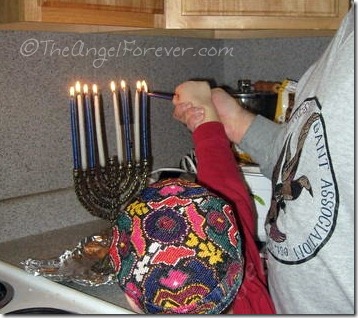 My parents have always put up decorations for the Festival of Lights. When in elementary school, I was also the child that refused to complete art projects that had to do with Christmas. I was not being disrespectful, quite the opposite. I was proud of my Jewish roots and wanted to make something special for my family and our holiday. Still, I must admit I always thought it was so neat to decorate a Christmas tree and go caroling (which I often did with my neighborhood best friend).

NHL is seven and now seems to be unfazed with the constant reminders of Christmas when out and about. He understands that most of his friends at school celebrate this day with their families and we do not. Of course, two years ago this was not the case. While in kindergarten, NHL asked TechyDad and me why we did not celebrate Christmas. We told him that we are Jewish and because of this we do not celebrate. At the time, he seemed to accept that, but days later we realized it was not the case.

When at school, there were children that tried to tell him Christmas was better than Chanukah. My heart sank for my son. Being in the minority this time of year is rough as a child. I wanted to shield him from this. I asked what he said. My smart little boy told him that Christmas and Chanukah were both special. He told the other child that he liked Chanukah because we light our menorah, sing songs, eat with our family, and get some presents.

To help, most years I ask NHL’s teachers if I can send in some dreidels and chocolate to play the dreidel game, along with some fun new Chanukah music. I think it is important that NHL shares his traditions with his classmates.

Disclosure: Parts of this post were previously published on a project I worked on. The text is mostly the same, but I placed a new introduction to go along with a topic that continues to be important for families.