One of the wonderful things that was available where NHL went to nursery school was swim lessons. I grew up taking lessons and feel the need to make sure both of our boys know how to swim. Thanks to too many things going on, I slacked at getting NHL started with this earlier. During the winter months I was silly and did not want to schlep the baby out in the cold for lessons. This spring I finally signed NHL up for six weeks of lessons.

We kept talking all about it and making it sound fun. NHL was excited that the little girl that will be going to the same elementary school this fall was in the same class with him. We watched the Little Bill episode on Noggin where he goes swimming too many times to count. Thanks to this NHL was officially my Guppy Guppy Guppy!

Although excited at first about swim lesson, he quickly decided that he wanted nothing to do with them. By the second week I had to go down by the pool and force him to get into the pool. I made it clear to his teachers after that that I was quite comfortable with him being pulled into the water. He had to get in and if some screams were the way, so be it. By the forth week progress was made. He enjoyed swimming with a noodle. During week five and six he actually left the side of a teacher and used the pool noddle to move around on his own.

After the sixth and final lesson the teacher approached me. She told me that although NHL had been there for all six lessons she was going to invite him to the make up lesson the next week. It was probably going to be outside in the kiddie pool and she thought it would be a gret experience for him. We gladly accepted.

Here are some photos of the outside lesson. JSL and I went to watch and tried to stay in the shade since it was so sunny and hot.

Getting comfortable in the water with his teacher. 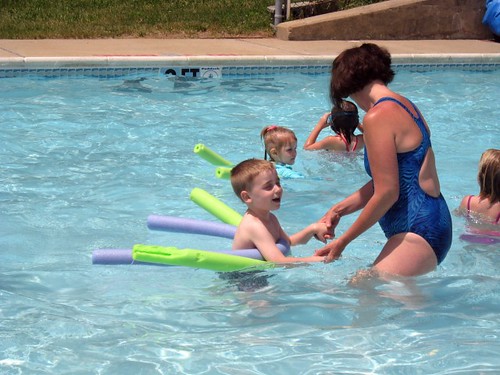 Once he was in the water he loved it. 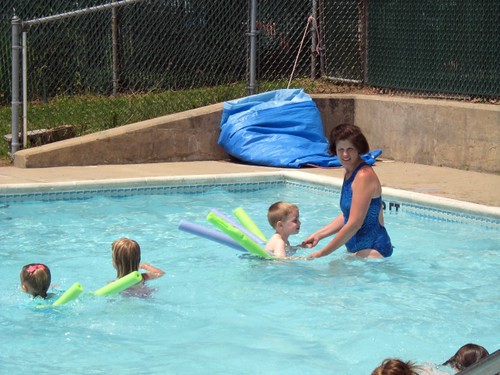 He finally realized that the ENTIRE pool was 3 feet deep and he could walk around without anyone. 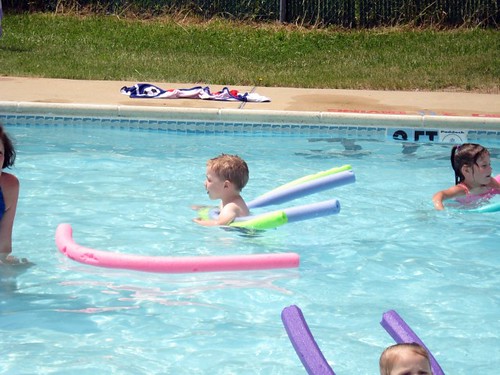 Meanwhile the little guy and I were getting very warm waiting outside the pool in the heat. 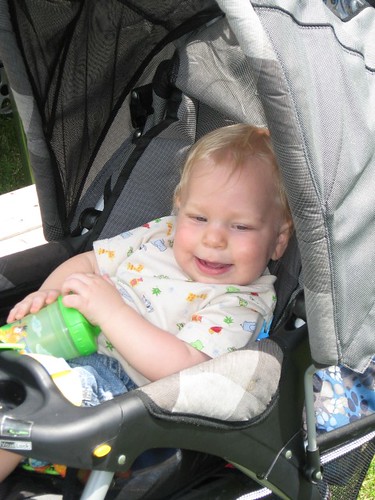 Of course the 3 feet deep kiddie pool had some negative features. NHL thought it was more fun "walking" around the pool rather than putting his legs up and kicking. 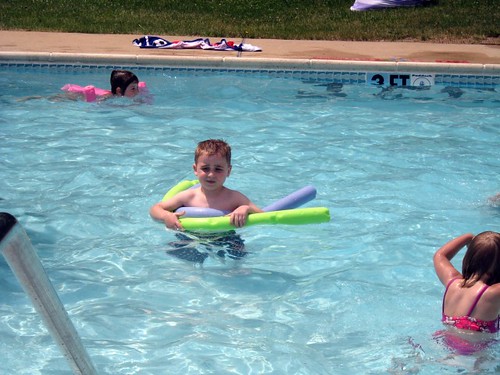 Usually the class is only thirty minutes, this day they were outside close to an hour. All of the kids had such a great time – even NHL wanted to race around. 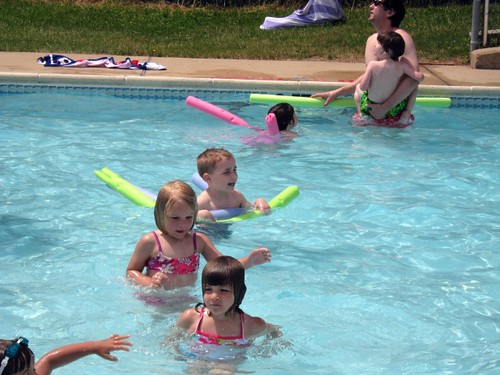 We are hoping to find another location for swim lesson for the fall. At this point we can not even think about membership where NHL was at school and they require that for future lessons. For now we just hope that this great introduction help to ease his fear of water and allow him to enjoy swimming fun this summer.