Celebrating the holidays in kindergarten

They left it up to me on what to do.  One of the teachers has been teaching kindergarten for quite some time and said she had many Chanukah sheets, crafts and items to use with the kids. I told her that I would go out and get each of the kids their own dreidel to take home. I asked about time to use the dreidels in school. She liked that and said she already had M&Ms to use.

Since it was snowing and nasty in the morning, I sent in some items with NHL just in case I did not make it. The dreidels were already with his teachers, a musical/light-up menorah, and a CD with Chanukah songs (BNL of course). 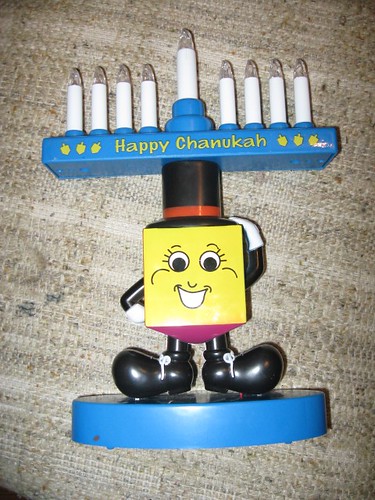 When JSL and I arrived at school, the kids were all sitting at their group tables working on sheets. Some were cutting and pasting, others coloring, and some using glitter (which is all over my jeans from sitting on the rug). Then I noticed there was a theme with the work. Everything had to do with Chanukah! Check out what came home with NHL, they are so neat. 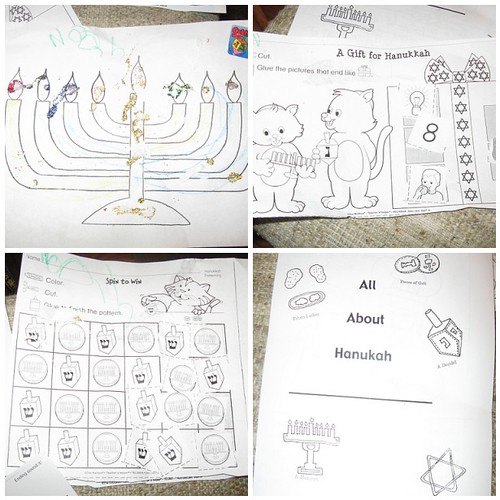 The one teacher explained that NHL showed his menorah in the morning and they had already talked about dreidels, read at least six books about Chanukah, and had listened to the songs I sent in several times. When the kids were finished and cleaned up, they met me on the rug. I showed them some of our giant stuffed dreidels, talked again about the Hebrew letters on them and what they mean in the game. Then the kids were split up into groups, M&Ms given out and we played dreidel. 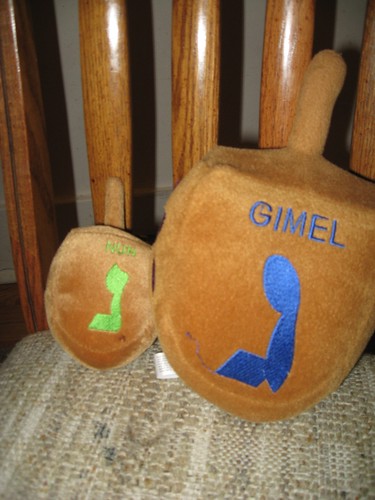 I have to say it was interesting watching the kids in my group. Some felt that anything other than gimel was not good enough and tried to hide their spin off to the side and pick it up quick. Of course, they would then proclaim they had gimel. This does not make for a very exciting game if everyone is constantly winning the pot of M&Ms in the middle.

While the kids played, the classroom aid was busy frying up potato latkes. Earlier in the day, the class had made the recipe together. Once the game of dreidel was over, they had a chance to try a latke with apple sauce.

I was so impressed! They honestly did not need me there, but it was sweet to be included. While the kids went to library, JSL stayed to play and I saw the huge rubbermaid container of Chanukah  items that NHL’s teacher had collected over the years. It was amazing and possibly had even more than we have at home. Kudos to her for making sure that all of the holidays are represented so well.

P.S. Be sure to enter in my Chanukah Shopping Fun – Game Giveaway. Don’t be fooled, this is great game for non-Jewish participants as well.