As many of you know, something I always do is reply to each comment left on my blog with an e-mail. I take pride in doing this. If you took the time to leave me a comment, which I adore, I want to acknowledge it.

Over the last week, I have been slacking in this area. NHL has been home from school all week thanks to winter break, but there is more going on. The days and nights have been a blur as we prepare for the arrival of the new refrigerator. To say that we finally took charge of the chaos within the house would be an understatement. This new refrigerator has been a blessing in disguise. Our curb on garbage night will certainly show how nicely we were able to purge "stuff" from our house. At last count, we had well over a dozen bags of garbage and the recycling is overflowing on our front porch.

Here was our attack method: 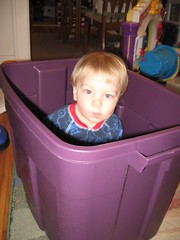 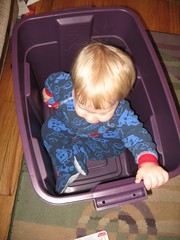 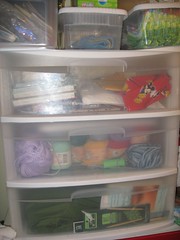 As you can see, that has kept me very busy here. I will catch up with my e-mail replies, I promise. Are we finished with the cleaning? No way! Next up on the list of purging/cleaning is the upstairs room. We have not used it in several years. It is an amazing space with an additional half bathroom. It will be fabulous for the boys to have as a playroom. A perk will be that we can move a lot of the toys from down here up there. We hope to be able to start working on that next week when the boys are sleeping. Slowly, we will finish up this project and then move on to our bedroom.

The refrigerator is scheduled to be delivered today between 1-3 and JL is here to man the fort with me. If I ever doubted that we needed a new one, below is what I found yesterday in the back of the old refrigerator. This is the container that was collecting the water that is leaking inside. It is a solid brick of ice. 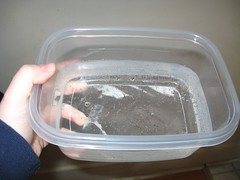