A Figment of my childhood imagination

While at Disney World a few weeks ago, memories from my childhood came flooding back. I recalled going on certain rides with my parents, eating at specific restaurants, shopping at many stores. Of course, these memories were more powerful since my parents joined us on our Disney adventure.

It was only fitting that Papa was with NHL the first time he went on the wild rides at Disney World. He went on the Tower of Terror with NHL and JL. I think Papa and NHL enjoyed the ride compared to my then green looking husband. Papa also went with NHL and I on Expedition Everest. As we were winding our way through the line to the coaster, Papa told NHL a story. The story was about my first time on Space Mountain (currently closed and being refurbished).

I believe i was also in kindergarten. We had gone to Disney World with some family friends. My father asked me to go on Space Mountain with him. As incentive he made a deal with me. He told me that if I went on Space Mountain I could have ANYTHING I wanted afterward.

Well, I took the bait and went on the line with him. I still remember being spooked out by the movies that they showed on the line. Add to this the fact that I was by far the shortest and youngest person on the line. When we got on the ride and sat down to start I told my father something. I told him that I had to pee. His fatherly words still remain fresh in my head. He told me to pee since there was no going back.

My father said I was fine with the ride when I got off, that was until I saw my mother. I went crying to her arms. Then the conversation turned as we had to finalize my deal for the ride. I told my parents that I wanted a Figment stuffed toy. We eventually went back to EPCOT. My father tried to get me to pick the small Figment, but my mother reminded him that he had said I could pick anything. Boy was he lucky that I settled on the medium sized Figment, or they may have had a life sized one to haul on the airplane.

Figment still has a special place in my heart. When we went back to EPCOT this time I had to ride the Journey into Imagination and spend time looking at Figment merchandise. I opted to get myself a new Figment keychain. 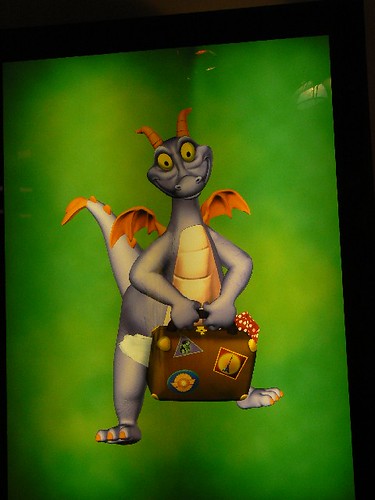 In case you were wondering, this memory has taught me something as a parent as well. NEVER promise your child anything they want to pick out when orchestrating a bribe. Always be sure to set limits on items that may be purchased. After all, your child may not be as nice as I was about the terms of the agreement.

« First full day at the Magic Kingdom
Ponderings from Yoda »