The summer time makes me nostalgic. I remember spending many a summer morning glued to my television set with my best friend, and neighbor J. What were we watching you ask? Each morning, we would choose to get up earlier than most children our age and meet up to catch Little House on the Prairie. Together, we would watch the episodes about Laura Ingalls and her life over and over. We watched as Half Pint grew up into a teacher and had children of her own. It was a time that we could relax, enjoy and dream of a simpler time.

When I heard that Melissa Gilbert had written Prairie Tale – A Memoir I was intrigued. Over the years, I remember hearing a lot about Melissa’s life growing up in the spotlight. I wanted to read the book because it would allow me to see the person behind the characters that she had played on television in Little House and countless other movies. 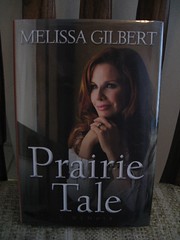 Here is a product description from the book:

A fascinatiating, heartbreaking, and ultimately uplifting tale of self-discovery from the beloved actress who earned a permanent place in the hearts of millions when she was just a child.

To fans of the hugely successful television series Little House on the Prairie, Melissa Gilbert grew up in a fantasy world with a larger-than-life father, friends and family she could count on, and plenty of animals to play with. Children across the country dreamed of the Ingalls’ idyllic life — and so did Melissa.

She was a natural on camera, but behind the scenes, life was more complicated. Adopted as a baby into a legendary show business family, Melissa wrestled with questions about her identity and struggled to maintain an image of perfection her mother created and enforced. Only after years of substance abuse, dysfunctional relationships, and made-for-television movies did she begin to figure out who she really was.

With candor and humor, the cherished actress traces her complicated journey from buck-toothed Laura "Half-pint" Ingalls to Hollywood starlet, wife, and mother. She partied with the Brat Pack, dated heartthrobs like Rob Lowe and bad boys like Billy Idol, and began a self-destructive pattern of addiction and codependence. Left in debt after her first marriage, and struggling to create some sense of stability, she eventually realized that her career on television had earned her popularity, admiration, and love from everyone but herself.

Through hard work, tenacity, sobriety, and the blessings of a solid marriage, Melissa has accepted her many different identities and learned to laugh, cry, and forgive in new ways. Women everywhere may have idolized her charming life on Little House on the Prairie, but Melissa’s own unexpectedly honest, imperfect, and down-to-earth story is an inspiration.

I just finished Prairie Tale and have to say that I really enjoyed it. The book was not only a behind the scenes tour of life on the sets with Melissa Gilbert, but also about a woman who finally found a path in her life that she liked. Melissa wrote a lot about growing up on the set of Little House on the Prairie. It was fascinating to read about her close friendship with Alison Arngrim who played her nemesis Nellie on the show. I laughed at how she was upset with the casting of a "man" as Almonzo Wilder. I was also touched by her close relationship with Michael Landon and his family. Melissa even allows us into her thoughts about the time when Mike, as she called him, was dying from cancer.

Melissa Gilbert’s life was filled with a lot of chaos during her late teens, twenties and even thirties. She abused drugs, was an alcoholic, and divorced her first husband. Of course, it was also during this time that she had two beautiful sons and found her soul mate in Bruce Boxleitner. Through the anecdotes and humor in the book, we see how Melissa finally realized her addictions and was able to get sober and become involved in Children’s Hospice and Palliative Care Coalition.

A fun part at the end of the book was the list of alternative book titles that were suggested by her friends. I sat there reading them to my friend on the phone and we laughed hysterically together. Sharing these shows the comedic side of Melissa Gilbert. If you are a Melissa Gilbert fan, I would highly recommend this book because you will learn so much from this strong, courageous woman.

One day I would also love to see Melissa Gilbert’s latest project, Little House on the Prairie, The Musical. During this production, Melissa is playing Ma to Laura Ingalls. If you have already seen this, know that I am very jealous!