Time to check the eyeballs

Back in August, NHL went to the doctor for his six year old well visit. While talking with the doctor, something caught her attention. She noticed that NHL’s two eyes were not tracking with each other. Immediately, I asked if this could be something related to his low muscle tone. She said it could be and she would like NHL to go and see a pediatric eye doctor. When I went to the parking lot, I called the number for the specialist and took the first available appointment for just over a month later.

Two years before this, NHL was scheduled to have an eye scan done while in preschool. This test was done for free by a local organization to test for several conditions that are often missed on children under the age of five. Unfortunately, thanks to a lost paper at school he was never tested.

So we waited the the day to arrive. Every so often, I would sort of see NHL’s eyes doing what she mentioned, but it was very subtle at best. The appointment was the last week of September. I picked NHL up from school and the two of us went to see the new doctor. First, we went into a room with a technician who examined NHL’s eyes. You could tell this was a practice for children. Finding Nemo was playing on a flat screen monitor on the wall. 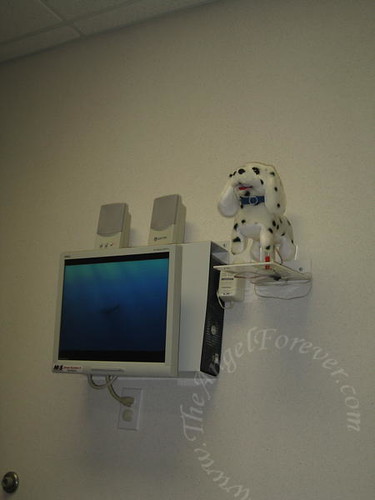 Later, we realized that this not only played movies, but was also a computer that generated the vision tests. It was technology at it’s best. NHL was a little nervous when he was asked to sit in the giant green chair. Admit it, the chair is pretty intimidating looking, especially if you are just six and have never seen one before. 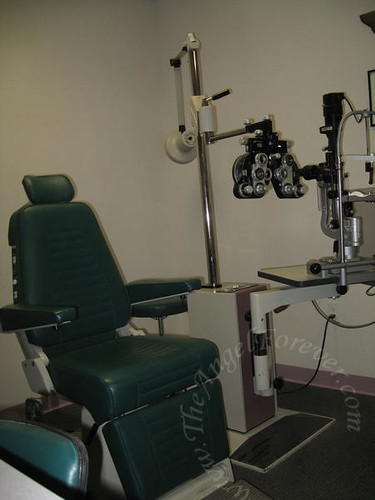 He did really well with the vision tests. Next up was tackling him to get drop in to dilate his eyes for a better exam by the doctor. This was a challenge, but thanks to a fabulous technique by the technician we got it done. NHL and I then went out to the waiting room to wait for his eyes to be ready. After about 30 minutes, we were taken into a room to wait for the doctor. Check out how NHL spent his time. 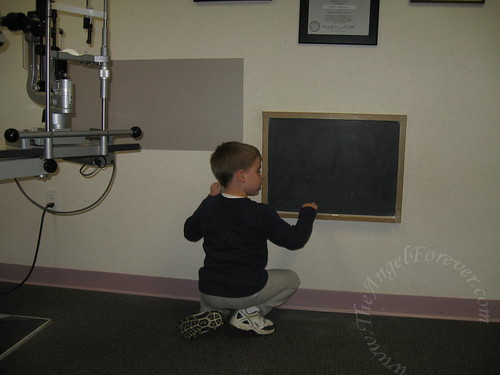 The doctor came in, listened to the concerns from our Family Practice doctor and did her exam. She said that his eyes are healthy, look great, and the muscles are working just fine. She said his vision is spot on now, but she would not be shocked if he needs glasses sooner rather than later. If things change in that end we should make another appointment, otherwise we are all set.

So, my question for you: Have you had each of your child’s vision/eyes checked for potential problems?

I think this is an area that many parents are unaware of. We all know to take our children to the dentist soon after they get their teeth, but they are born with their eyes. Even a non-verbal infant could have potential eye defects that are not checked. So here is a quick PSA with some interesting information. I am not being paid for this, I simply wanted to get the word out about the Enfant™ Pediatric VEP Vision Testing System.

Here is some general information about it from their website:

The Enfant™ Pediatric VEP Vision Testing System is a child-friendly, non-invasive medical device used to test for visual deficits in children 6 months of age and older. The vision test does not require dilation or sedation, and is a painless, safe test. The Enfant™ is the only objective vision testing device capable of evaluating the entire visual pathway available today. Most insurance plans will pay for this test.

How it works:  After positioning three sensory pads on the child’s head, an operator initiates the test. Cartoon characters appear and music plays while a series of “attention-catching” stimuli are presented to the child on a video display. The Enfant™, using Visual Evoked Potential technology (VEP), recognizes the child’s neurological responses and processes the VEP data.

At the completion of each test, simple "pass/fail" results are immediately presented on the menu-driven operator screen in both graphic and numeric formats. The results are then printed out for the patient’s medical record.

We are testing children six months of age and older in order to detect visual deficits such as strabismus, optic nerve disorders, and severe refractive errors, which could lead to amblyopia.

From the description on the website and other information I have read about it, I am positive that this is what NHL was supposed to have had done when he was four. I am going to contact the local agency that does the testing to see about getting JSL (2) checked. Since TechyDad and I both wear glasses, it can not hurt to be thorough.

The website for the Enfant™ Pediatric VEP Vision Testing System also has a section where parents can answer some questions to help assess your child’s vision. From there you can also get assistance to find a doctor and see how to request a test for your child.

Still not sure what to do, well check out these statistics and see what you think:

Again, I am sharing this information that was passed along to me to my reader as an FYI. I was not paid to do this and am not a medical professional. I am simply a mother that has a child that is within the 21% that did not have a formal vision screening/eye exam until he was in first grade. Hopefully, more doctors help to get the word out to parents about when we should take our children for their first check up since so little is really out there on this topic.