There are days that I wonder exactly how old I am. Some days I feel young, while there are other days that I feel ancient. On a recent "emergency" trip to the dermatologist, it made me question just how old I really am.

Rewind to June when family was in town for my mother’s big birthday party. During the day, before the party, my parents, brother, sister-in-law, niece, JSL and I went to the cemetary. We went to see Papa S’s grave and check on things. We decided not to move the cars and walked over to where my Nana and Papa are, along with other members of her family. It was not a particularly long walk, but the terrain was rough and overgrown in areas. By the time we were done, I was itching my legs. With sensitive skin, I did not think too much of it.

A few weeks later, I noticed I had a little rash on my leg and it itched horribly. I used some cream on it and it got a little better. This happened over and over again during the summer months. When my electric shaver died, it really made my leg a mess in that area. Sensitive skin and real razor blades do not mix. Thank goodness I finally replaced my electric shaver the other day.

In July, I went to the dermatologist for a skin check. Being so fair skinned, it was time after over a decade without one. I showed him my leg and he said it was not ring worm (my fear from years of teaching), but was eczema. I was told to use some OTC items to help and call if it was not better.

School started, H1N1 ate up another 2 months and then it was December and my leg was a mess. I was up at night because it was so itchy and nothing helped. It was getting more inflamed and bothersome. With a little nudge from my sister-in-law, I made an appointment to see the dermatologist. I was shocked when I was told they had a cancellation with the PA for that afternoon. Thanks to NHL going to Chess Club, I was able to take the time.

The PA was really sweet. Of course, she wanted to know why I ignored the problem for so long. Then she looked at JSL running around the room and figured it out. 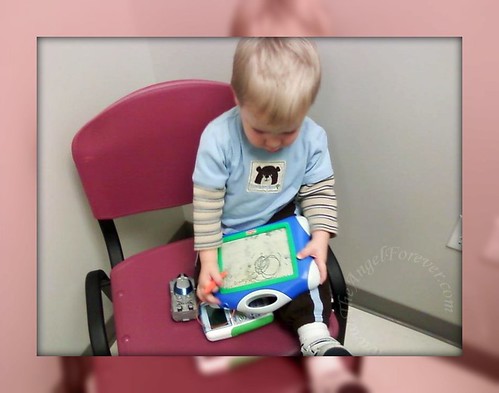 I told her time just flew by, things happened and finally I had enough. She told me I had horrible eczema in that area. Something at the cemetary may have bothered the area initially. Shaving allowed it to continue and lack of proper moisture made it itch. Scratching only made it worse. I was handed a prescription and told that if things were not significantly better to call back in two weeks.

As I went to the car, I laughed. Here I was just 33 years old and getting treated for eczema. Oy! Now I guess we know where the boys have gotten it from. Of course, theirs never got as out of control as mine did. Tis the story of a Mama’s life.

Tomorrow, I have to head out to get moisturizer for my arms and legs since the winter is zapping everything out of my already dry skin. So if anyone has any suggestions for good fragrance free body lotion, please let me know.