Growing up with Elvis

I was just eight months old when Elvis Presley passed away, yet I grew up with him. My father is a HUGE fan of the King. From an early age my brother and I learned to rock out to Rock-A-Hula, Blue Suede Shoes, Don’t Be Cruel and other Elvis Presley classics. Each year, on my parent’s anniversary, they would dance together to their wedding song, Can’t Help Falling In Love (the classic is still so much better than the remake by UB40). Over the years, Dad’s record collection has been replaced with CDs to keep the tradition going. Now, Papa is proud that his grandchildren learned to hula with the King!

Since today marks 33 years since Elvis Presley passed away, I thought I would share my father’s growing collection of unique Elvis items. 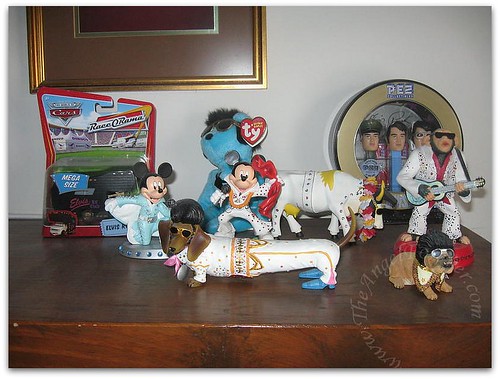 So on this sad day for Elvis Presley fans, I ask you what is your favorite song from the King?