Helping Children During a Tantrum

We have all been there at one time or another. A tired, cranky, over stimulated child that has had too much and begins to act out. Most of the time, we can see it coming, but sometimes there is just nothing we can do about it. There are days that we just have to roll with what is happening to get errands out of the way.

We may picture toddler aged children being the only ones that have a public tantrum.Of course, they are not the only ones that can have meltdowns. Children with special needs (or otherwise), like my older son with Asperger’s, can become overwhelmed with situations. Sometimes, their only way to respond and let us know they are anxious is to cry. While a parent may get a sympathetic nod from others when a toddler melts down, it is not the same when you see a crying and hysterical older child. Invisible items like autism mean that we need to think ahead and have a game plan. This reality made me think of a past project that I wrote about toddler tantrums. Many of the items in it are relevant to children of different age levels that may need to have their attention redirected in a moment of need.

Toddlers and tantrums, they often go hand in hand. The reality is that they are a normal part of development for children. Toddlers are learning about the world around them and trying to assert their individuality. Since they are only able to verbalize their thoughts to a certain degree, body language, along with screams/cries in the form of a full blown tantrum may result.

As a parent, there are times that you may see a tantrum coming and be able to prevent a complete and total meltdown in your child. Asking your child to leave a party where they are having fun and playing nicely may not result in a favorable situation. What may help is to warn your child that you will be leaving soon. Doing this one or two times can allow your toddler to wrap up their play and get ready to go. Do not tell them they have five more minutes to go. Kids this age do not understand time, it is a completely abstract concept to them. Presetting is huge for children of all ages. 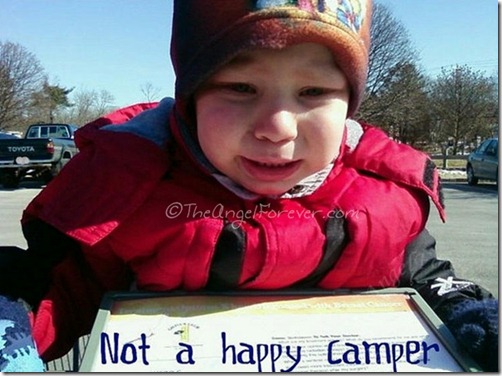 Of course, there are times that tantrums may just crop up. Case in point was in February 2010. I had to run some errands with my two year old son. JSL was in a decent mood when we began our travels. Things started to sour as we went into the grocery store. My strong willed two year old decided that he was NOT going to get into the shopping cart at Price Chopper. His face at the time tells the entire story.

Yes, I stopped and took a photo of my toddler having a tantrum. Often times, I have found that acting silly, trying to divert his attention from the situation, and taking photos help to refocus him away from a complete meltdown. In this case, I was not so lucky. We continued into the store and, after a short time, JSL recalled why he was upset and began part two of his tantrum.

Why was he so upset you ask? My independent two year old did not want to be confined in a shopping cart. JSL wanted to walk and help Mama. This was not on my agenda. I wanted to go quickly and have him where I could see him. This tantrum process was very new to me. Although JSL was not my first child, I never had this with my older son. JSL was living up to the terrible two tantrums that give toddlers a bad rap.

So, what do you do when your child has a tantrum? Do you let them get it out of their system, leave the situation, or try to divert their attention?

Disclosure: Parts of this post were previously published on a project I worked on. The text is mostly the same, but I placed a new introduction to go along with a topic that continues to be important for families. The Autism Awareness ribbon icon above was created by Melesse and comes from Wikimedia Commons.

« Disney Does History
For the Love of Veggie Burgers »