I got paid to shop at CVS (sort of)

For months now I have been intrigued by all of the CVS bloggers out there. These are people like you and me that go to CVS spend a few bucks (typically less) and get tons of items for their families with ECBs. ECBs are basically CVS bucks that print with your receipt to use within a month on future purchases. One of the best websites I have found is Money Saving Mom. Each week Crystal posts ideal ways to get the most out of the CVS bucks so you spend little, use past bucks and earns lots more for future trips. I also really like I Heart CVS where they post the ads early and have amazing coupons.

Last night was the end of the line for some March ECB deals. JL told me to head on out and try to get those things. Here is a photo of what I ended up buying. It isn’t a lot, but still not too shabby once you hear what I spent and earned in ECBs. 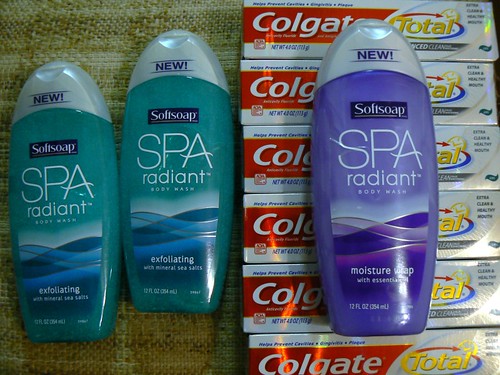 Here was my plan. I wanted to get some of the Lypsyl that was on the March ECBs. They were $2.99 each and then you would receive a $2.99 ECB – so essentially they are FREE! There was a limit of 5 for the month. Problem, I waited WAY too long to get these bad boys and the store had none. Oh well, onto the next item on my list.

I wanted to get the Colgate Total toothpaste that was also on the March deals. Again this was $2.99 cost and $2.99 ECBs at the end. Problem, all of the signs showed the new weekly Colgate special of BOGO and did not have this. Still I grabbed ones by a sign and figured I would ask at the register.

Next I wanted to get the Softsoap Spa Radiant that was on this weeks specials. It cost $4.99 and gave $4.99 of ECBs (limit of 5). I did not see any of these and the manager helped me to find more on another endcap.I also picked up some wipes for JSL that had a $3 ECB that made them a decent price.

Next was a problem. The computers were overriding the March sale on the Colgate, so the manager was called over. He said if ECBs did not print out he would take care of it since it was clearly right to the end of the month. Sure enough nothing printed at the end. I was charged $11 for BOGO toothpaste (3 offers for the 6 tubes). He told me to get $15 of free things. I tried to get the wipes, but when those were put through with my $15 free it was a no go there. I asked him to please reverse that and give me the $15 credit back and we would call it a night. He said he would just give me the cash back.

So the end result of my trip was that I spent about $17 of my own money. With that I received $14.97 in ECB for my next CVS visit and he handed me back $18 in cash!!!  See I was paid to shop at CVS – LOL!  I will likely head back later to get two more of the Softsoap and a few of the new April monthly buys.

« Wii have big boy back in school!
So what do you think? »