Tuesday was a day that I was hoping we could skip over. It was the afternoon that I had a dentist appointment for NHL and had made the much debated MMR vaccine appointment for JSL. I cried many nights over this. I did not want to do the vaccine just yet, but felt so much pressure from so many different sources. I basically felt I was damned if I did and damned if I did not do it right now. In the end, I got sucked into doing it now. With NHL in school and the rise in Measles all over I went for it. Now we must wait to see how he does. The doctor told me to give him ibuprofen 2 hours before, acetaminophen 1 hour before and rotate them every three hours after the immunization was given for two days.

The little guy conked out after the vaccine like I have never seen before. I am sure the trauma combined with no afternoon nap was the reason behind that. He seems to be doing really well. My guard is still up though. The reaction I had to the MMR was a week later. All of the information from the CDC even states that most reactions that happen will occur 7-12 days after the administration of the shot. So we are watching and waiting to see how things go.

Before going to the nurse appointment for the vaccine, we went to NHL’s dentist visit. He really loves Dr. N and so do we! They called us in a few minutes early. Then a surprise was thrown our way. Now that NHL is five they like to do x-rays to check for adult teeth formation and cavities of existing teeth. Problem, the machine scared NHL and I had no warning to talk with him about it before this. That is my only beef with this office. If you know something new is coming next time at least tell the parents so they can get their child ready. NHL was close to allowing it, but we opted not to fight it this time around. He claims that next time he will allow it.

Everything after this went extremely well. When he got into the room he sat down in the chair and was asked what toothpaste flavor he wanted. Check out the choices: 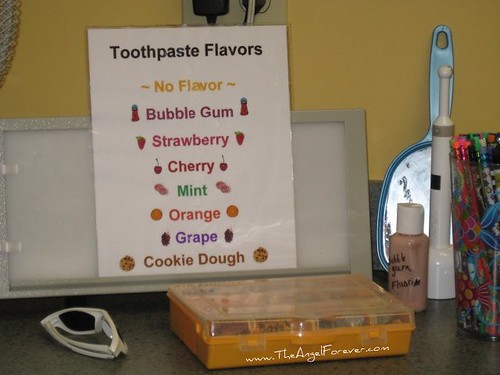 The first time I saw this list I was shocked. I know that when I was little and went to the pediatric dentist we had possibly two choices – bubble gum or cherry (I believe). Now they have seven choices or may opt for no flavor at all. NHL selected grape this time around, but last visit he had cookie dough (that’s my boy).

NHL was very good at waiting for the hygenist to come into the room to clean his teeth. He watched the cartoons that were on the televisions right above his chair and played with a toy. 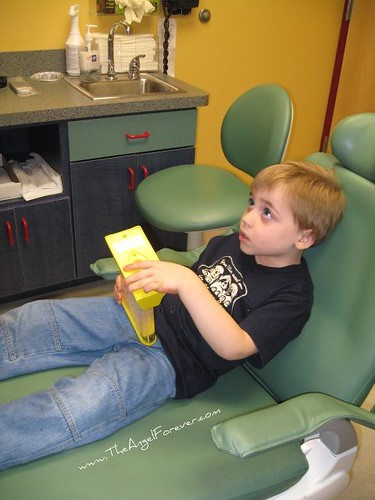 When the hygentist came in NHL did a fabulous job. He stayed still, kept his hands down, and was great at letting her clean his teeth. He was not a huge fan of the tarter removal, but who is really? When she was done cleaning his teeth I noticed that she got a small cup of slimy looking gel. She had a toothbrush and put it on NHL’s teeth. I assumed what it was, but had never seen it before. I was correct, it was the fluoride treatment. My how it has changed since my youth. I remember hating that part of the visit because of having the air in my mouth for 15-20 minutes and being bored with my mouth partially open. The hygenist told me that this new treatment is amazing, they only brush it on for a minute and the kids have to wait 30 minutes before eating/drinking and it is done. She checked and I was right, it was NHL’s first time and he had no clue it was done!

The dentist came in and confirmed that NHL has one six year molar almost completely in and the one above it has cut as well. She said that could certainly be why his hands are in his mouth more, but if that is the only sign we should not complain. Of course she said his teeth look great, but she is not 100% sure there are no cavitites since he did not allow x-rays. That was my chance to mention something about a warning before coming in with something new, but I was a little distracted. JSL was fussing and my mind was too worried about going across the street to our family practice for the MMR.

Hopefully if all goes well NHL will have his x-rays done at the end of March for his next visit.