A kindergarten sized thank you

As a teacher, I always love to see the creative items that my son’s teachers do with his classes. I have been absolutely amazed with NHL’s kindergarten teacher. Not only has she been a wonderful mentor for my son, but I have learned a lot from the sidelines as well.

The week before winter break, the kindergarten class celebrated three of the major holidays of the month. Wednesday was Chanukah and I went into play dreidel game with them. They also made latkes and had apple sauce with it. Thursday was Christmas where they made candy covered Christmas trees using ice cream cones. Friday they had someone come in to teach them African dances for Kwanzaa.

The day after I went in for Chanukah, I stopped by the classroom. As the room parent, I had been "secretly" collecting money from any parents that wanted to contribute for gift cards. A huge storm was coming in on Friday and I wanted to make sure that the teachers and aids had their gifts for the two weeks off.

When I arrived in the classroom, the kids ran over and gave me a giant thank you note. The teacher told me that they wrote it themselves and if I needed a translation just to let her know. The special envelope was made by one of the adults. Apparently they do special themed envelopes to make letters unique. Here are the two sides of the envelope: 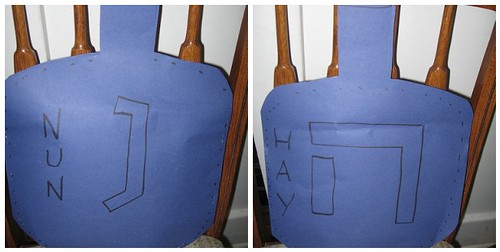 And here is a picture of the really cute note from the kids. NHL told me that they all took turns going up to write parts of it. 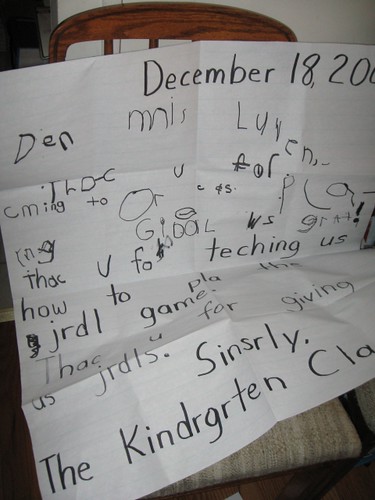 This is definitely something that I will be packing away to keep so NHL can see what his classmates made.