Twas the night before a snow storm and all through the arena, the people attending were thankful that they purchased tickets for the Thursday night show!

Last Thursday night we were gearing up for a HUGE weekend of snow. That was also the weekend that Disney on Ice was here for a bunch of shows. My parents had four tickets to take NHL and me. Thank goodness they wanted to see it on Thursday night. If we had selected another night we may not have been able to make it to the arena (Friday we had about a foot of snow and more Sunday).

Have you ever been to a Disney on Ice show?

If you have ever been to Disney World, Disneyland or any other Disney owned park, then you know they are the pros at merchandising. Well, Disney on Ice is 110% the same way. When you walked into the arena, both sides had at at least two merchandise stands,  two snack stands (with Disney cotton candy and snow cones), and multiple areas with photo taking stations (for a fee of course).

It was really interesting to watch NHL. We walked around the area at least one complete time and stopped at each of the selling areas. He looked each time, but never asked for anything. After a while, Nana asked NHL if he would like something. He thought the Mickey Mouse Binoculars were really neat. They were reasonably priced, so Nana and Papa bought them for him. 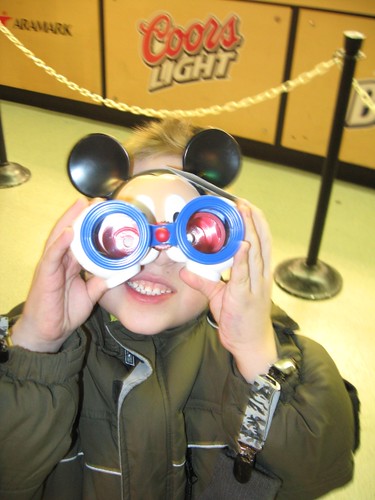 Two years ago when Nana, JL and I took him to See Monsters Inc on Ice we bought him a work hat and program. To this day both of the boys still love the hard hat.

Next, it was time to go and find our seats. NHL walked along with Nana and his Mickey Mouse merchandise bag. When you walked into the arena, this is what you saw on the ice: 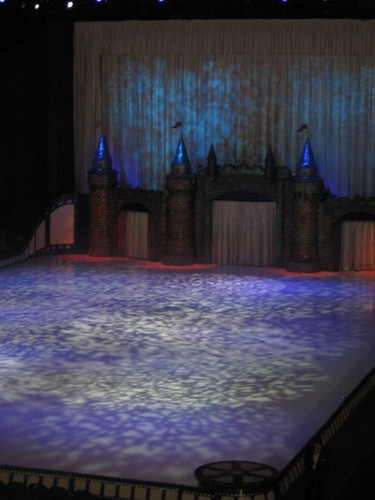 Nana and Papa bought NHL some popcorn and we sat and waited for the show to begin. NHL sat there taking everything in. I quickly learned that my camera did not do a great job at photos, but the video was decent. I took a few short videos so NHL can enjoy them. Here is one of the start of the show (more will be uploaded later).

Start of Disney on Ice show from Angel Forever on Vimeo.

We all really enjoyed the show. Now NHL needs to catch up on some Disney movies since he has never seen Beauty and the Beast, Pinochio, and several others.

Thanks to Kailani at An Island Life for starting this fun for Friday. Please be sure to head over to her blog to say hello and sign the Mr. Linky there if you are participating.Aloha #28

« Keeping with traditions
A kindergarten sized thank you »