Memories from THAT night in February

Yesterday came and went like any other Sunday. In the back of my minds for weeks, even months, I have been anxious about the day. Why February 15 you ask? On February 15, 2008 I nearly lost my son forever. JSL had a febrile seizure on that horrible night. We knew we would likely encounter one with him since NHL had one when 11 months old, I had several and so did JL. Typically febrile seizures are nothing to worry about and kids come out of them with no problem. That night things were very different.

We suspect that JSL had a virus that caused a lot of phlehm. We took him out of his crib because we heard his labored breathing and then noted he was feverish. For some reason I just knew things were not going to be good. I called my parents and they rushed over to our house. Thank goodness Nana was here because she saved my baby. While holding JSL he went into a transe like state and we all knew he was having a seizure. What I was not ready for was my baby’s body turning gray and going lifeless in my arms.

NHL had turned blue from the temporary stop in breathing when he had his febrile seizure, but within seconds (although it seems like hours at the time) he began breathing on his own. JSL did not do this. He was gray and lifeless and we could hear there was a blockage in his airway. My mother stepped in as I stood there paralized with fear. She gave him a big pat on the back and we heard the plug in his airway move. She then put him down onto the bed and gave him those oh so precious rescue breaths. He quickly started to breathe on his own and was losing some of the gray color by the time the paramedics arrived.

We were rushed to the hospital where JSL and I stayed for four long nights. To this day we still do not know exactly what caused the fever and the blockage in his airway. Prior to the febrile seizure he had been suffering from a rather intense battle with double pinkeye. The fever did not go down right away and eventually they found an ear infection that had been hidden behind a lot of fluid in his ears. Seeing a child in a hospital bed is the worst thing, but when it is your child it hits even worse.

I know that for many more years I will always worry whenever JSL’s temperature goes up. The fact that he had his febrile seizure at 102 degrees is alarming, but he has a lower than "normal" body temperature to begin with. I now cherish even more than before the little things. Watching the boys interact and seeing how they grow is amazing to me. Below is a photo of the reunion a little over a year ago. NHL never saw JSL in the hospital and had to make sure his baby brother was a-ok. 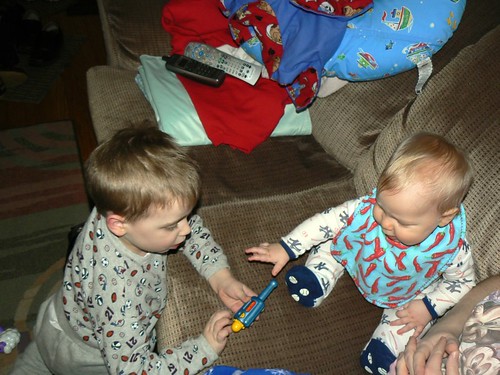