About a month ago, the principal of NHL’s Hebrew School sent home an e-mail to parents. We were asked to help the kids make a mask-hat for a Purim contest. There were little or no directions. The mask-hat was to stay above the eyes and had to be worn the entire time the kids were in class.

I kvetched about what I basically considered an assignment for the parents, since the kids are only in kindergarten and 1st grade in NHL’s class. Still, JL and I opted to figure something out . We did not want NHL to be the only child at Hebrew School without their own mask-hat.

We went to the craft store and found a foam hat. I flipped it around and put it on NHL’s head. Bingo! It looked like a mask-hat to us. We thought about themes that we could do. Perhaps an ark with the animals going two by two on the blue hat. We walked over to the scarpbook stickers and nothing would work for that idea. NHL saw some ocean animals that he thought were cool. We agreed that they would be perfect for the blue mask-hat that would now be the ocean.

When we went home it was time to make the project. Here is the completed mask hat on NHL when we were finished. 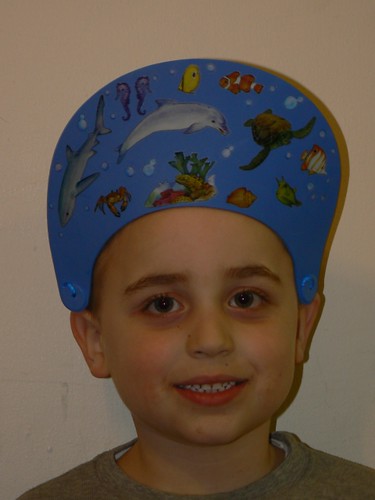 Now we need to find the Halloween costumes that the boys wore so we can attempt to go to the Purim Carnival tomorrow night at our temple. Should be an interesting time to say the least. Photos the boys from Purim last year are here and here.