Oy, it has soy

Did you know that almost all foods contain soy? It seems to be a very popular filler that many of us are unaware of in the foods we eat. Of course, as a mostly vegetarian house (kosher meat is too expensive) we eat a lot of veggie burgers, "burger" crumbles, veggie dogs, tofu and the like. I was well aware that these were mostly made of soy products. You are probably wondering why I am suddenly noticing all of the soy in our daily lives. The answer is a little complicated. 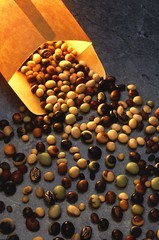 Over the last 3-4 weeks I have been quite sick. For days I would end up on the couch with the boys doubled over in pain. Then to add insult to my injury, I was sick to my stomach and running to the bathroom. At first I thought it may be from all of the new vitamins that I added to my diet. I was taking them with food, but they are still harsh. I stopped taking them for 3-4 days and nothing stopped. The abdominal pain intensified to the point where I could no longer ignore it. I made an appointment to see my doctor to try to get some answers. One other odd symptom – I was horribly itchy. I was literally clawing my arms and legs because they itched so badly.

I went in wondering if it had anything to do with my endometriosis, might be IBS or something else. In the back of my mind I also wondered about my gallbladder. My doctor immediately suspected my gallbladder was to blame. She sent me home with a TON of items to do and scheduled me for a gallbladder ultrasound. She mentioned that if that was clear another test would be ordered soon after that.

Last Thursday night I went for the ultrasound. The technician hinted that she saw nothing wrong when I wondered why it was taking so long (got a little nervous). On Friday evening I was miserable. I have a high pain tolerance, but that night I was in agony. I was crying hysterically and almost called my parents to watch the boys so I could go to the ER. As I told JL, the pain was worse than when I had no epidural and was getting pitocin during labor. Seriously!

Suddenly, in the middle of my agony it dawned on me. The last major attack was on a night that we had Morning Star riblets as part of our dinner, the time before that when we had  fake burger meat balls. Friday night we happened to have veggie dogs. Hmmm. . . . . all of them are mainly compromised of SOY! Could this be the problem when it had never been for all of these years?

I told JL my theory and we made a conscious effort to avoid foods with soy in it. Saturday, Sunday, Monday, and Tuesday I ate nothing that had a major amount of soy, took my vitamins, workout out with Leslie Sansone DVDs and felt pretty good. Yesterday my doctor’s office called to tell me that the ultrasound results were perfect and to schedule me for another test. I asked the nurse to give the new information to my doctor. They called back and agreed that it very well could be a soy allergy/intolerance. I spent part of the afternoon yesterday reading up on soy. How do soy allergies present in adults? Why  are soy allergies becoming more prevalent in adults? And the big question of the day, what items have soy hidden in them?

I was floored to learn that most vitamins – including almost all of mine have soy listed as an ingredient. All of our breads, cereal, Fiber One bars, and even the sprinkles in our house list soy. The nice thing is since it is a common allergan, companies must clearly list if the item contains even traces of soy. 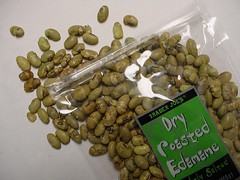 Tuesday I am heading to an allergist. I have not been to one since I was in elementary school. Clearly something has changed in my bod with the newly found anaphylactic response to walnuts and now this suspected soy allergy. IF I do have a soy allergy I really do not know how I can completely avoid it in my life, but at this point I will take it one day at a time.

Do you have a soy allergy or know someone that does? I would love any advice or information from anyone that can provide it.