It has now been a little over a month since NHL discovered his first two wiggly teeth. At first, he was scared of the tooth wiggling and was careful about the food that he ate. He refused to bite into anything like an apple or corn on the cob. If it was tough to chew, it was avoided.

During the last two weeks, we really tried to talk about how fun it can be when losing a tooth. We have read a lot of  books on the subject,  talked to NHL about wiggling the tooth more, and patiently waited for NHL to show less fear. This approach seems to have worked since, slowly, we have watched him with hands in his mouth moving the tooth. Last week, we noticed that one tooth in particular was pushed way out and not straight anymore. 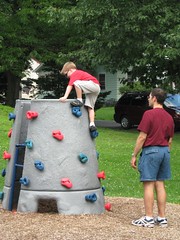 Yesterday morning, I asked NHL if I could peek into his mouth and test how wiggly the tooth was. He let me check and I was a little shocked with what I saw. The tooth is definitely is moving nicely, but behind it I saw three little white dots. Sure enough, the new adult tooth is cutting behind the tiny wiggler. Oy!

When we went to the dentist about 4-5 months ago, I asked her what we should do if that happened. Of course, at the time, she told me not to worry because she doubted that NHL would even have a tooth that would be ready to wiggle before his next appointment at the end of September. Clearly, she was off on that one. I told her that I was worried because hubby only lost one tooth without the dentist having to pull them. JL’s teeth did not loosen up and all had to be extracted. I was the opposite. I lost my teeth easily and only had two teeth pulled when my upper eye teeth refused to budge. 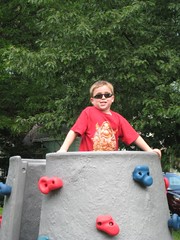 I decided to call our pediatric dentist office yesterday. I explained the situation. The woman told me that this is quite common (which I knew) and said they do not pull teeth immediately. She explained that if he has any pain to call them immediately, but to really have NHL work on wiggling that tooth and try to get it out quickly. She suggested apples and other items that are tough to bite into and put force on the tooth in question. I also questioned how much time we should give before calling back again. She told me another week or two and then give them a call if the tooth is still being stubborn.

We are going to try a few more wiggling tactics today and add some foods to help expedite this process. When we tried to move the tooth as far forward as we could, NHL was able to do that and it moved quite a bit. When it was time to push it the opposite way, he complained that it hurt. My guess is that the tooth now coming in back there could be causing some discomfort. 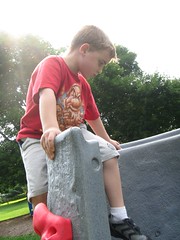 So, to all of you out there: Do you have any suggestions on how to help that little tooth that has to move out?  We need ideas for helping it along. Right now it is not wiggly enough to even think about pulling, so that is not a good option. JL and I would love any things that worked for you and/or your children.

Thanks so much in advance. With any luck we may have this tooth out in time for NHL’s 6th birthday on Monday. All I have to say is the Tooth Fairy is all ready here, so bring it on!