Plan of action, of the bug kind

Although I may complain about the winter often, there is one part of it that I enjoy a lot. What is that you ask? Well, I love the fact that almost all of the bugs from the spring, summer and fall are pretty much gone. I rarely have to think about them, look at them or clean up thanks to them.

The Friday going into Labor Day weekend I found larvae at the base of my hardwood floors. All weekend we did a massive clean up and found more of these nasty critters. Monday I left messages for two highly recommended exterminators in our area. Calls were returned to me the next day. The one was not able to schedule a visit to come and look until Thursday morning. I took that appointment. When the second called I admit, I lost it on the phone crying over bugs! Not a proud moment, but I was disgusted. While he was on the phone with me he asked me to describe the larvae. He quickly told me that he did not think that they were powder-post beetles. Instead he figured they were some sort of pantry pest that came in a packaged food that we bought at one time or another and were spreading around our kitchen and house. He was going to make a special trip out to us that evening to check things out.

Tuesday in the early evening Exterminator #1 showed up. He came inside, kind of looked at the larvae. In hind sight it bothered us that he identified it as Larder Beetles from a standing position. I kid you not, he never once got down to take a closer look. He basically told us to get rid of any food items in our pantry that were not in hard plastic containers. So basically all of the granola bars, cereal, cake mixes and the list goes on and on.

Next he went into our basement to look at the piles of saw dust . . . or so I thought. We were wrong. That was simply sand thanks to ants pushing their way into our house. Lovely, but not horrible. Next we saw his face get very serious. He started to really look around over the laundry area at the base of the house. What we heard was not something we expected. The exterminator saw mud. Not too long before this, I had mentioned to JL that I saw something new by the window and wondered what it was. Well, thanks to these nasty pests upstairs we found that we had a termite problem. He suspected it was new. He looked quickly around the entire basement and went outside. Found two more spots in our yard that had termites. We were verbally quoted a price to rid the termites, but it had NO warranty. We were told a written estimate and explanation would arrive in the mail within a few days. Please note it has now been a week and nada has come.

JL and I opted to start working on the cabinets in the kitchen. Wait, check that. JL has been doing the work since I am too disgusted by the entire thing. Together we opted not to go on a massive food ditch until we met the second exterminator.

Thursday morning Exterminator #2 arrived. He came in, got on the ground and looked at our larvae. He said it looked like a pantry pest, but could not 110% identify since a lot of them look alike. He told us to clean everything out, vacuum often (hardwood floors are great places for them to hide in), use hard plastic storage and clorox to wipe down areas to kill any larvae eggs that may be around and unseen. Gross yes, but sadly a fact of life.

He went into our basement and looked at the termite troubled area. He agreed that no structural damage was made to our house and it was very localized. A lot of time was spent pushing on wood, looking into hidden areas along the base of our house. Nothing else was found at the time. When he went outside he actually took something out to measure the area around and when asked checked our garage. Eventually he excused himself to go into his truck to write a proposal. Yes, you read that right – he did it on the spot!  When Exterminator #2 came out of his truck he had a truly professional package with state laws on pest control, their plan of action, their warranty (wahoo), and the proposed cost. The only small catch was two areas would not be under the warranty at this time since they are not able to be accessed (front/back porches). He went over the plan of action and took our a termite bait station to show us. Approximately 14 of these will be placed around our house and forever monitored for activity to get rid of the termites.

When he left JL and I were pretty sure we knew which exterminator we would be going with. Friday afternoon we were packing up the car to head to my niece’s second birthday party out of town. On my way into the basement something by the back door caught my eye. MUD!  Yes, there were actually termites there that both of the exterminators missed. My heart sank and I felt sick. The ride to our destination was long as I kept thinking about the new termites. Before I left I put in a call for Exterminator #2 to see how this would alter our proposal. Monday early evening he called back and said it would not change a thing. JL and I were relieved and on the spot asked to schedule him to take care of the termites. Next Monday he will be here for half a day working inside and out to set up the system. This is going to cost a lot of money, but we can disclose it if we sell the house and transfer the warranty and system to new owners. This is huge!  In our area termites are pretty prevalent. Many of our neighbors have dealt with them over the years (before we owned the house). Apparently in the north we are lucky and only have one type of termites, but they LOVE sand ground and that is what most of our area is on.

Lesson learned is to pay attention to things in your basement. Thank goodness we caught this early and hopefully will be able to kick this quickly before more termites decide to call our house dinner. 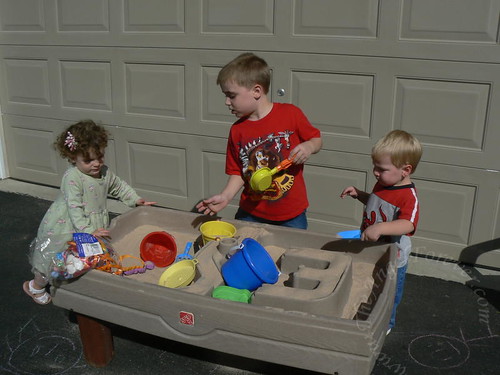 Sorry, had to leave with a nice photo from the weekend when bugs were not on the brain.