This morning I wrote a rather large check to the exterminator. As much as it hurt me to write that number on the line, I realized that we were lucky. Two weeks ago we called two exterminators to come and look at something. While they were here they found termites in our basement.

This began a huge roller coaster of emotions over the last two weeks. I was disgusted by the larvae that was causing us trouble upstairs, but glad that they made us catch the termites in the basement. It may seem silly, but I likely would not have noticed these mud tubes on my walls and let the termites gain more control and do further damage.

The exterminator was here with two other people. The three of them worked from about nine in the morning to a little past eleven. They did quick work cleaning/treating the word in the basement, drilling holes in the concrete for chemicals (and patching of course) and setting up the bait systems along the perimeter of our house.

When they were finished, the check handed over and contract signed, I went outside to look at the work with the exterminator. He had previously shown us what the bait systems would look like, but I did not realize what we would see once they were in the ground. Here is one of them in the grass along the side of the house: 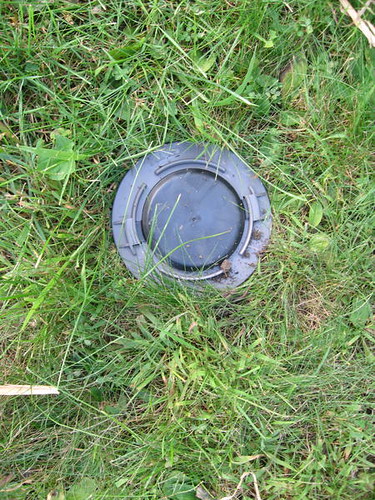 I had seen these before at other houses, but I had not clue. I just assumed that were something else. Now of course I know their secret of termite control. 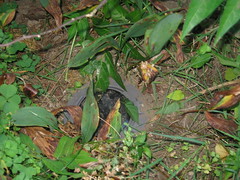 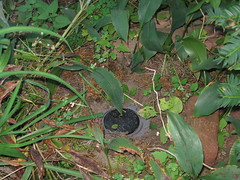 Of course, I will never judge someone over termites. We are powerless over where these critters decide to seek food for dinner. This time they selected my house, next time it could be yours. My suggestion to you, inspect your basements and know what to look for. . . then if you suspect something get a professional in to do a free inspection/estimate.

Now we just wait and see what happens. The exterminator will be back in November to look for activity at the bait stations all along our house. After that they will come back in the spring to check again. We will continue this 3-4 month routine for the next 2 years until we see nothing at the bait areas. In the back of my mind I keep chanting "Die termites die . . . that’s what you get for messing with us!"