Last night, we FINALLY took NHL to get his six year portraits done. Yes, he turned six two months ago, but who’s counting?!  Throughout the entire thing, I kept thinking that there has to be a conspiracy. There must be more going on behind the scenes that happens when you go to these studios.

#1 – YESTERDAY, they changed the prices. Just our luck. We wait this long and they do it on the day that we finally go in. *sigh*  Had the flu not gotten our house, we probably would have done this 2-3 weeks ago. Oh well, what can you do?

#2 – There has got to be something in the air once you enter the studio zone. The kids are great and cooperative when out in the waiting room. The second they walk into the actual room with the camera all bets are off. This happened in June with JSL for his 2 year portraits (had to do them twice since he would not stay still) and this time it was NHL’s turn. It was like someone was pumping sugar into his veins. He was bouncing off the walls after the first few pictures. NHL would wiggle, dance like he had ants in his pants, and look at the computer monitor instead of the camera.

#3 – Although you never really get the perfect photo, you select the best of the bunch just so you do not have to trudge back again for a second round of "fun" and excitement. I definitely felt this way last night. Even now I am second guessing what was ordered because I sort of like a different one more. Oy!

#4 – The child that is not celebrating their "birthday" is always the better behaved one. That child is the one that will pose, sit quietly and help to make the session work. I swear in May, I am telling NHL it is for him and not for JSL to test this theory.

So, you want to see some of the photos? Here are some thumbnails of the ones taken (sorry they are not the best). First up are the photos with the 6. We took dinosaur and Nintendo/Mario props with us. Two with dinosaurs made the photographers cut and only one with Nintendo.

We went with the first one because it was the best. TechyDad liked that one more than #3 because of the smile on NHL’s face. #2 was never really in the running.

Next, NHL was asked to go onto the floor. The photographer captured this gorgeous shot (this does not do it justice): 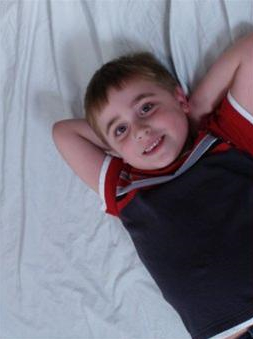 From this point on, the session started to go downhill. NHL was wired and did not listen well and could not stay still. He was looking the other way, doing a goofy smile, or something else that a six year old boy would do. Only three from this section made the photographers cut. (Please note the bad cropping was the program I used and not the studio)

Then we decided to be really brave and toss JSL into the photos. We were shocked that it was the little guy that was listening to what the photographer said (unlike at his portrait session in June). The photographer tried a few cute poses, but the little guy had a hard time balancing. Still, she sold us on this one: 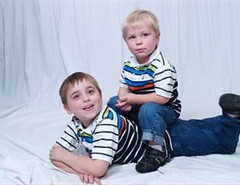 Now I need to stop second guessing the sheets that we ordered and go with it. I know I did this last year as well, guess it is just a mother’s job!