Put on your yarmulke it’s time to celebrate Chanukah

Friday night was the first night of Chanukah. We lit our menorah at home, gave the boys their gifts from Bubbe and Grandpa and allowed them to play while dinner was in the oven. For the longest time, we had no clue what JL’s parents could get the boys for Chanukah. We thought about asking for money toward season passes to Six Flags, but knew that they would likely prefer something else.

One day, it suddenly dawned on me, so I called JL to tell him my thought. NHL had a difficult time using the Nintendo DS, perhaps we should look into the Leap Frog Didj or Leapster. We opted for the Didj because it was more age/grade level appropriate. Then, it was time to find something for the little guy. For some reason, we had never seen the Leap Frog ClickStart until this year. It has been around a while and is a first computer for toddlers. This seemed like the perfect early learning tool for him. It was compact and looked easy to set up.

We got an amazing holiday deal on the systems (package deals) and a few extra games. The boxes arrived minutes before we were going to light the menorah. The boys kept clawing (literally) at the boxes trying to get inside. NHL was even more eager when he saw that they were from Leap Frog – kids that can read take the fun out of things! Here they are just after they finally opened the boxes. 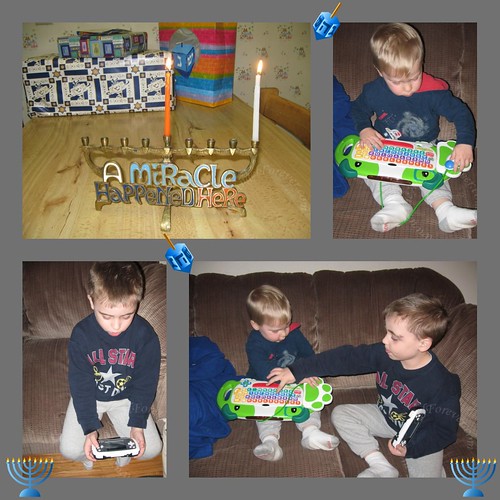 We set the little guy up and he just "played" by clicking and pressing on keys. He really liked the Tree game because he could connect that by pressing on the keyboard it made the computer talk and the puppy move to catch the fruit. At first, NHL was really frustrated with the Didj. The machine kept turning off as it was getting set up. He was not happy about trying, learning and practicing something new. This quickly changed. By Saturday, there were huge spans of time that we would find his nose at the Didj playing away. Even the adults had fun testing out the Star Wars and racing game. Of course, we also took the ClickStart and JSL was able to show that to everyone.

After dinner on Friday, we went over to Nana and Papa’s house. We lit the candles with them (see above menorah photo) and the boys got another present. NHL received Rush Hour Jr and loved it. He enjoys puzzles and this was a fun challenge for him. 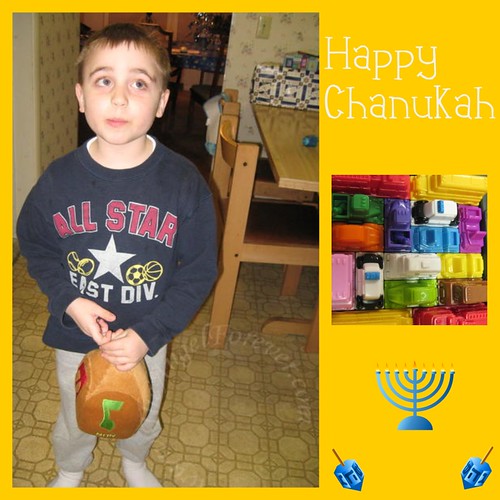 We allowed the boys to play with their toys for a little while. Then, we decided to have my birthday cake that was postponed thanks to all of the events from Wednesday. Since I knew a storm was coming, I asked for an ice cream cake since it would not go bad if we did not have it that day. These were not the typical Carvel cakes, they were specialty ones. One was Strawberry Shortcake and the other Cinnabon. Both were quite delicious. 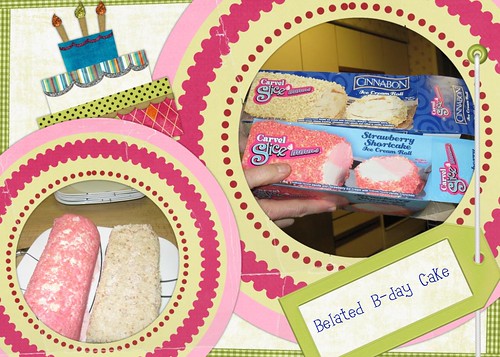 Soon after the cake, we packed the boys up and went home. The little guy wanted to play his "Pup Pup Puter" before bed. We let him try it while big brother got ready for sleeping. Then, they both went to bed. They had to rest up for fun with Cousin S who was coming in for our family Chanukah party the next day.

Disclosure: All items were purchased by us or relatives and are linked up to our Amazon affiliate to share with other people who may be interested in the items.