Pilot light out for the count

Yesterday evening, when JL got home from work, I went over to the thermostat. The boys were both going to have a bath, so I wanted to get the house warmer for them. Of course, all day I had been sitting and shivering in the house. A few of my Tweets mentioned that my hands were numb. Seeing that I have troubles with my hands from a car accident in middle school, I didn’t think anything of it.

At 7:00, both of the boys were ready to head into the tub. NHL was already in there and the little guy was perched on his Diego potty seat. I thought it was a little cold, so I went over to the thermostat. I did a double take. It was set at 65 and reading 62. This was not a good sign over an hour after I had turned it up.

I went into the basement to check on the furnace and could hear something, but had a feeling it was probably the hot water heater and not the heating system. I went upstairs and asked JL to head down to check and see if the pilot was lit. Hubby went down and confirmed that the pilot was not lit.

Hubby and I have no clue how to light our pilot. We will both admit that we are afraid to do it since it involves the natural gas. We called the power company and told them. They told us that someone would be at our house at one point. About 40 minutes later, the doorbell rang and it was two gentlemen from the power company.

JL went with them down to the basement. As time went by, I was getting very nervous. Nothing was working. They were not able to get the pilot to stay lit. Eventually, they said they suspected that the thermocouple was no good on our furnace and it needed to be replaced.

Please picture my face draining of all blood. I seriously was freaked out about no heat. Our house was down to 60 degrees (normally at 63) and the night low was going to be in the teens. We could pile blankets on us, or go to my parents, but the old pipes in our house were susceptible. What happened next is what will warrant a call to the power company. The one gentleman took the old part off to show JL. He then took the time to explain exactly how to hook it back up and start the pilot. He also warned hubby that the thermocouple is easy to break, so to handle and uncoil it carefully.

Everyone left while I went to put NHL to bed. He was upset since he knew we had no heat and worried. Still, he settled and went to sleep. As I was trying to chase the little guy to bed, JL called from Home Depot. The thermocouple we needed was on back order for three weeks now, but thankfully they found ONE in the store that had already been partially opened. Oy! Thanks to my friend L, I got the number to Lowes and had JL call there to see if they had any. Nada!

JL came home with the one and only thermocouple in the area and all of the pressure in the world. I sensed he was worried about something happening to the part. I went down to the basement to cheer him on. If he can build a computer and make it work, I knew he could go this. When I arrived, he already had most of it set. Finally it was time to light the pilot. It was lit and appeared to stay on. At this point JL turned the nob from pilot to on and WOOSH – we saw the blue flame on the pilot. 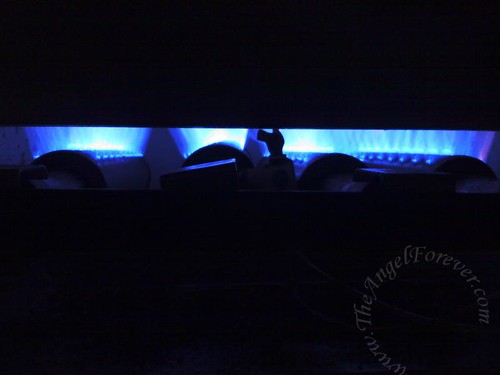 I swear this sight was amazing!  The fear of a huge bill, bursting pipes and more left my mind. We went upstairs to monitor the thermostat. In less than an hour we were up to 66 degrees. We turned it back down at that point and called it a night. TechyDad – you are my hero. Thank you for working so hard under pressure to fix the problem and keeping us all safe, I love you.

P.S. An extra special thank you to J and her hubby P. They were willing to help over the phone with the heating issue (with e-mailed photos). So nice to have such great friends.

« Dreaming of Disney’s Pop Century
Cousins then and now »