Over the last few weeks, JSL has decided to spread his wings. He does not want assistance with anything and is trying anything/everything on his own. It ranges from putting shoes on, taking his coat/hat/boots off, climbing into the carseat, putting a cap on JSL style and building with LEGOs. 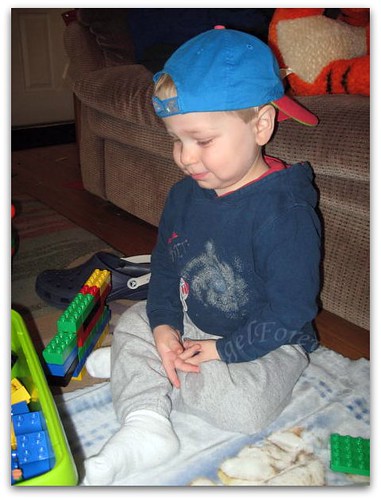 If you had asked me 3-4 weeks ago if I liked to get the little guy ready in the morning I would have said NO WAY!. Seriously, JSL would fight me over everything. He did not want to stop playing, he was interested in a show, he wanted to stay in his PJs. There was always a two year old excuse. Then I noticed something before a recent bath. JSL wanted to get undressed alone. He watched big brother do it and wanted to be a big boy. We let him do it. He refused any assistance until he could not figure out how to get long sleeve shirts off. This made the wheels spin.

Hmmm. . . could I use this technique in the morning?

What did I have to lose? I tried it out one morning not too long ago. He jumped down and started to strip off his clothing. He ran after each piece to put them into the hamper (one of his favorite things to do – even with clean items). I was floored with the excitement of this activity. The next morning he shocked me more. JSL actually ran out of my room and screamed it was time to get dressed and change diaper. WHOA! Next thing I knew this was what I saw: 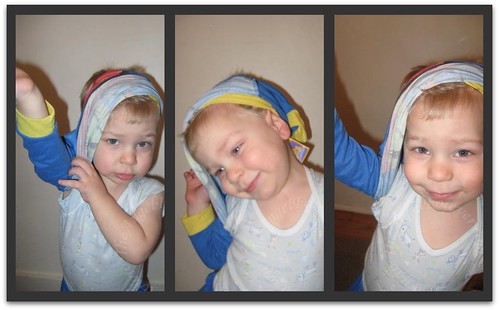 JSL kept parading around the living room and dining room with his PJ "hat" on his head. He was hilarious. The little guy’s personality has been coming out more and more lately. He was even all smiles and fun when it was time to get the onesie off and go for the diaper change. Time for a little Peek-a-Boo first: 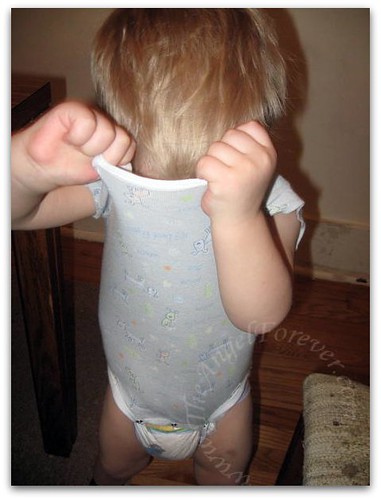 At this point he went to a blanket to get a diaper change and get dressed. As usual lately, JSL was transformed into "Baby JSL Pup-Pup!"   Seriously, he will not reply to you unless you call him by this name. The silly "pup-pup" kept rolling around like a puppy and panting and pretending to give kisses like a dog. 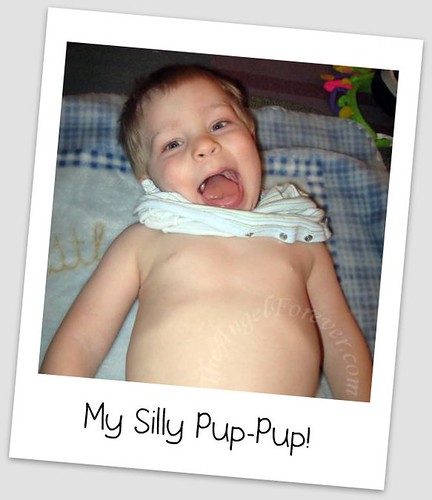 This independence thing is nice. The only down side is when we are late getting out the door and a tantrum begins when I try helping JSL put on his shoes. Oy! I will cherish these fun and silly moments because I know they grow up way too quickly.