A tale of many tantrums

Today, NHL went back to school after two weeks off. This meant that JSL’s entertainment system was gone. Of course, this was made worse by the fact that JSL woke up after Daddy and NHL had left for the day. The reality of time with only Mommy was harsh. Sure we have fun, but I am not his six year old brother who is in constant motion.

After breakfast, I asked JSL if he wanted to head out to the post office and grocery store. He liked the idea of going out. Much to my surprise, he was really good about getting help putting on his shoes and coat. Recently, meltdowns are possible at this time because Mr. Independent wants to do everything on his own. Love that he wants to do this, but not when we are late to get NHL from school or on the way out to an appointment.

We had a nice ride to the post office. When I stopped in the car after to check things from the PO Box. the little guy let me know that this was not acceptable. When we pulled into the grocery store just down the street, there were protests. Mr. Independent was not happy that he was sitting in the cart. This is the face that I saw: 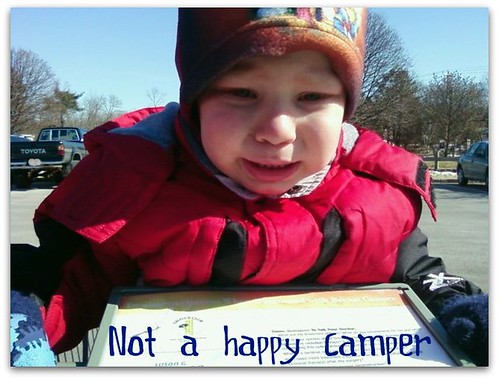 Of course, that should have been a sign to turn around and leave. I did not and we continued into the store. JSL helped me to hold onto the coupons that printed out with my store card. He was content with that. We found some items in produce (new Tempeh to try) and continued on. When we got a few more aisles into the store, JSL wanted out. He kept saying "Let me out! I want to walk."  I told him that I needed his help to look for items.

This was about the point that I went back toward the front of the store and was greeted with the following: 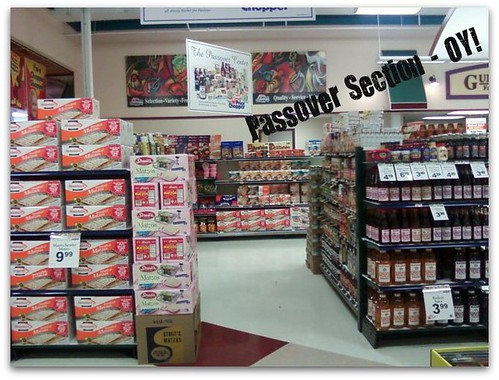 It was right about that point that I was ready to sit on the floor with JSL and have a tantrum. I like the concept of Passover, but the stress involved in the planning and the expense of the specialty foods that are Kosher for Passover makes it too much.

Luckily, the rest of the trip was not too eventful. We skipped actually looking in the Passover section, got the rest of the items we needed and went home. JSL was so excited to go and pick big brother up from school a few hours later that he fell asleep a block away from school!

Any ideas on how to combat independent toddlers that can not wander around the grocery store?

This is something new to me since NHL never did anything like this until he was older. Of course, I know the best solution is to simply shop without him – LOL! I will spare you details about the tantrum in the car later while going home from NHL’s swim lessons. Let’s just say it involved kicking and screaming since The Wiggles were not put on the CD.

« Welcome to my baby nephew
The importance of technology education »