Long time readers are probably wondering: what is a nice Jewish girl that keeps kosher at home going to a blogging event about Cook’s Ham? Well, this blogger likes to support New York state businesses like Price Chopper grocery stores. This blogger is also trying to avoid Walmart because of something that they support in education that I am 110% against (story for another day).

A short time ago, Price Chopper announced on their Facebook fan page that they were looking for Mommy blogger to come to their first ever blogging event. Hello! Christina from CutestKidever and I quickly signed up and made contact with people from Price Chopper on Facebook and Twitter. I was excited to see what they had in store. Today, we learned that Price Chopper is branching out and trying to do more with social media. They are represented on Twitter, Facebook and reading blogs out there that mention their stores. Thanks to Cook’s ham, they decided to take the plunge and sponsor a Mommy blogging event at one of their stores.

Let me begin by saying that I went into this event with a completely open mind. I had no real idea what to expect. I knew that I would meet new people, learn about Cook’s Ham and hopefully have fun in the process. All of this was accomplished and so much more. As a person that keeps kosher at home, but has eaten and does eat pork products on occasion I did not think that I liked ham. I was not sure if I was going to try something – in the end I did (sorry to my relatives, but you know seafood also calls me when out).

I met Christina outside of the Price Chopper store. When we walked in, we were greeted by Liz and Heidi from Price Chopper. They were so sweet and knew us from Twitter. They could recall several of my Twitpics of items and knew that I had been Passover shopping recently. We also met the two women from Cook’s that would be doing the demonstrations and sampling of their products.

We sat down, looked at everything and then noticed something on the wall. Price Chopper has free Wifi in their food court. . . . sweet! Of course, we did not know this and never thought about bringing our computers to the event. I know I never would have kept up, but Christina is an amazing live blogger (saw it in person at Disney Social Media Moms Celebration last month). Several of us Tweeted during the event. @CutestKidEver and I used #CooksHam to make it easier to follow along. Here is a view of things in the food court area that held the event: 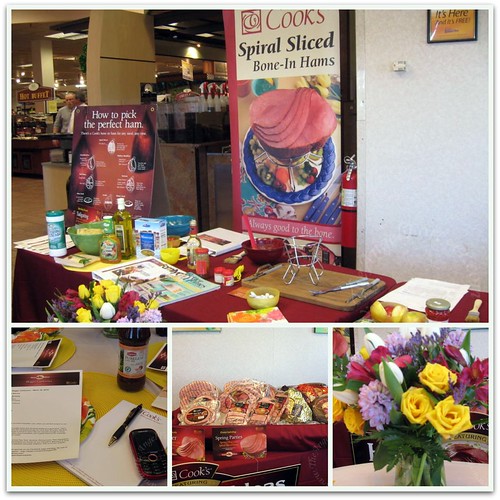 As I sat down with Christina and waited for other bloggers to arrive, I looked at the agenda for the Cook’s Ham Blogger Conference.

Faith from Cook’s Ham introduced herself and explained about their products. Next, all of the people from Price Chopper were introduced. I even met the person in charge of buying all meat for the stores, including Kosher items – score! Kim and I chatted a lot about things during the event. After this, the nine bloggers, including myself, went around and told everyone who we are and why we started blogging. It was nice seeing many people that I had met online. From here, Faith started the demonstration on how to carve a spiral ham: 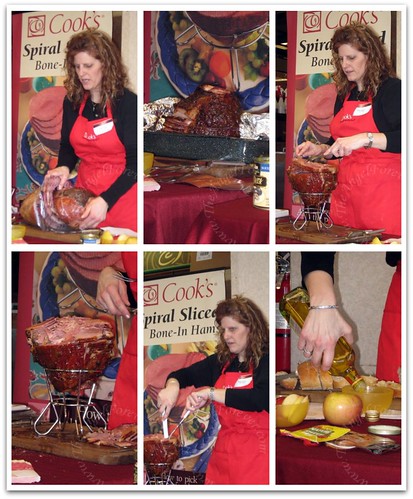 As someone who has never cooked a ham, and probably never will, I learned a lot. I did not know that you had to cut around the bone and slice it. I also learned that a lot of people have a hard time knowing how long to cook a ham. Eventually it was taste testing time. Here are some of the items that were given out to try: 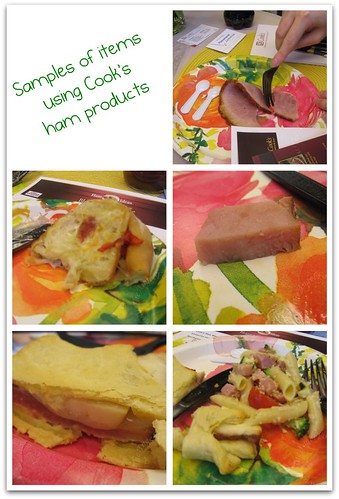 From top right down to top left and down:

Before we knew it, they were giving everyone a challenge of our own. The mission of sorts was to shop in the Price Chopper store and spend under $100 to supplement a ham to plan a list of meals. These included brunch/dinner, school lunch, after school activity, pot luck dinner, family game night and breakfast. Being the non-ham eater in the group, I opted to be paparazzi and follow Christina around to take photos as she planned her menu on the run. 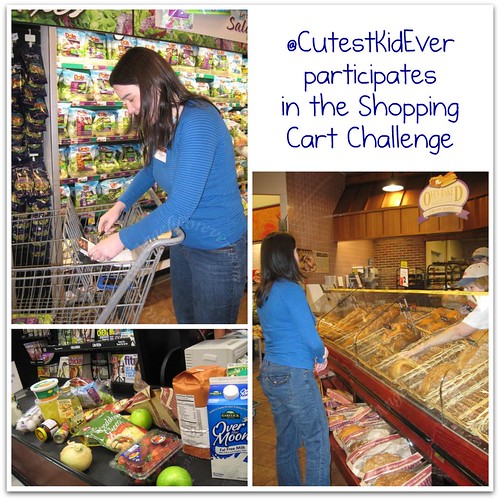 The challengers were going to be awarded in three areas (1) Most Value (2) Most Creative and (3) Easiest Meals   When the time was up, everyone went back to the food court area to present their meals. Let me tell you, I heard some amazing ideas. I especially loved the ones that really thought about kids and families and how they would be eating the items. There were items that I know I can switch up and even make in our kosher kitchen. I would love to link up to other bloggers at the event. If you were there, PLEASE leave me a note and I will add in a mention for you. Here are some photos of my fellow bloggers enjoying the afternoon event: 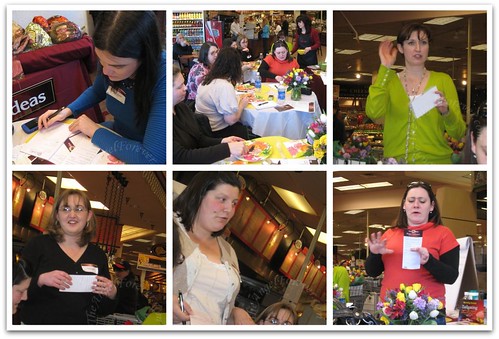 When we were wrapping things up, Maureen Murphy from Price Chopper came to let us know about new projects that Price Chopper is working on. I know that we will be signing up NHL for the Kids Cooking Club with Jodie Fitz. This program launched in September 2009 joins the Fuel AdvantEdge and Tools for Schools that are very popular in areas with Price Chopper stores. Price Chopper will also be launching tips very soon about healthy Easter basket options for kids and more fun cooking projects to do with your family.

Before I knew it, the three hours was up and it was time to head home. Here is my shopping cart as I left Price Chopper. 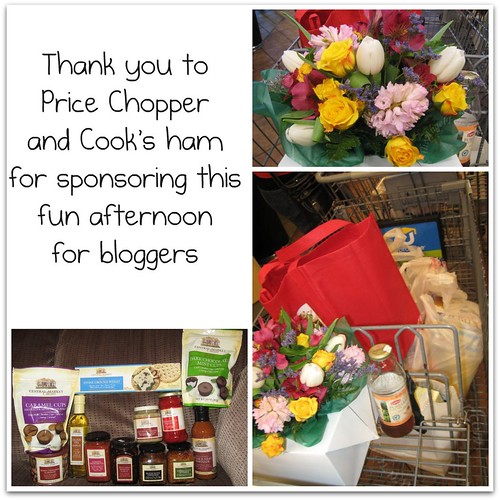 I know I look forward to many more events at Price Chopper! More items to share soon and a giveaway associated with the event as well.

Disclosure: Cook’s Ham and Price Chopper invited me to be a part of this blogging event. I did not pay for this, nor was I paid to go. I was not asked to blog about this, but wanted to share my experience with my readers. The opinions expressed in this are my own. I was not compensated, but did receive sample items, some groceries and flowers from Cook’s Ham and Price Chopper.

« Taking Daddy to the ENT
Blogging conferences and events »