Early Saturday morning, we left the house. At the time, it was snowing and we had a 4-5 hour drive ahead of us. I was doing the driving and the snow definitely made me nervous. By 7, we were on the road. Once we got out of the general area, the snow cleared up. Kick-up spray from other cars were the main concern. We stopped once and continued along on our way. My parents were about an hour and a half in front of us. We kept getting calls to update on road conditions. The last 30-40 minutes was a bit hairy. We saw several cars and a double truck off the road.

By noon, we finally made it to Uncle I and Aunt M’s house. Why were we heading there? It was time to meet Baby Cousin BA and play with new big sister SG. Here is a photo of the little guy all wrapped up and sleeping in the blanket that I knitted for him. 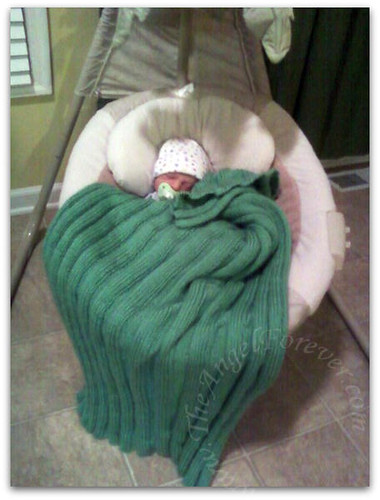 Now a close up of his teeny tiny handsome face: 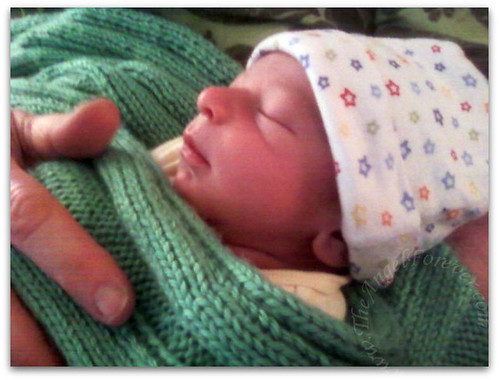 NHL had a blast playing with cousin SG. They ran around, used PlayDoh, colored and danced.  JSL was not feeling so great, but played from time to time. Let’s just leave it at MiraLAX was purchased to help what is bothering him . . . *sigh*

Sunday morning, we packed back up before leaving to go to Baby BA’s bris and party afterward. Lots of photos of family coming from this later. TechyDad has those, so I am stuck sharing what I took with my cell phone quickly. At about 1:30, we figured it was time to leave the party. We had a 4-5 hour trip back home. Of course, on the way we stopped at Wegmans since we do not have them near up. It was fun to see how into the Team USA baked goods they were. Guess they were really cheering on Ryan Miller!

JSL fell asleep before we got to Wegmans and managed to stay asleep for another two hours once we got into the car. He was a very tired little guy. 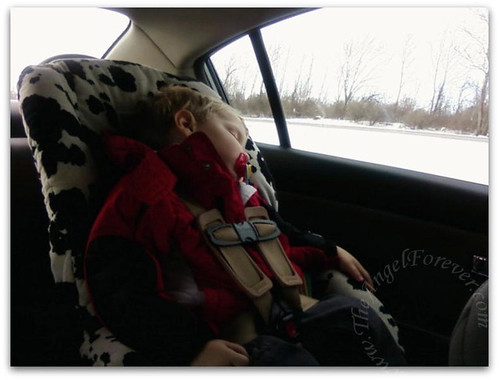 Meanwhile, NHL amused himself in the backseat. He had fun playing games on his LeapFrog Didj since it was behaving. Note the level of concentration on his face = tongue sticking out. 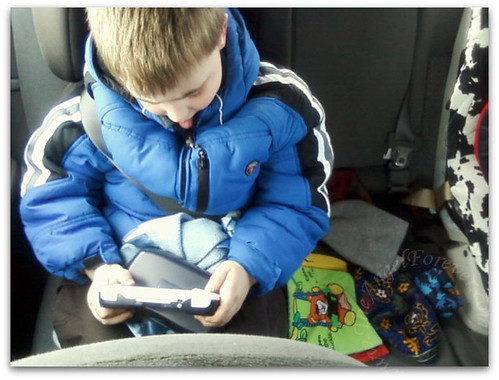 Thanks to my father, at about 3:30 we found the Team USA vs Canada hockey game on a radio station. Talk about an edge of your seat kind of game. As we were looking at scenes like this:

TechyDad and I listened to the game and save after save that Miller made. We all know that Team Canada won the gold, but kuddos to Team USA for the nailbiting third period goal to tie up the game with 24 seconds left. They deserved better than Silver, but played their hearts out and deserve a lot of respect.

We arrived home at about 7:15 and got the boys into bed. After all of the traveling, everyone in the house went to bed very early. Today my mission is to make NHL a "Thing 1" from Dr. Seuss shirt to wear to school tomorrow. They are celebrating Dr. Seuss and also going on a field trip. Thanks to this, NHL’s costume will be minimalized – no red pants or blue hair. Promise to share later. Now off to be creative.

« Michael Jackson, chess and inside-out PJs
Rainbow Brite is back »