Sex and the City 2 Soundtrack

In the summer of 2004, TechyDad and I decided that we really wanted to check out a show that had been on HBO and was ending. Everyone seemed to watch the show and loved it. All of the television shows at the time were talking about how the series would wrap up. That summer, TechyDad and I started to rent DVDs of Sex in the City one at at a time and eventually caught up with the end of the series. We quickly watched all of the adventures of Carrie, Samantha, Charlotte and Miranda. Some nights, we would watch an entire DVD and I would go out the following day to secure the next DVD to watch.

To say that we were hooked would be an understatement. When it was over, we waited to see what would happen next. Would Carrie and Big come back in a movie with the rest of the girls? Then they did and once again this summer the girls are back on the big screen in Sex and the City 2 (released May 27th). While I may not be a fan of their fashions for myself (love the shoes – but no way they would work for me), I adore the hip and fun music that has been featured in the show and movies. 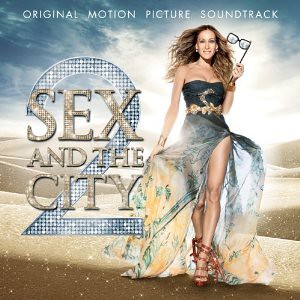 Recently, I was asked by One2One Network to review the new Sex and the City 2 soundtrack (available in stores May 25th). I jumped at the opportunity to listen and hear what I hope to soon witness when I get to see the movie on the big screen.

More about Sex and the City 2 Soundtrack:

The soundtrack also features the stars of Sex and the City 2, Sarah Jessica Parker, Kim Cattrall, Kristin Davis and Cynthia Nixon, performing the Helen Reddy classic “I Am Woman.” 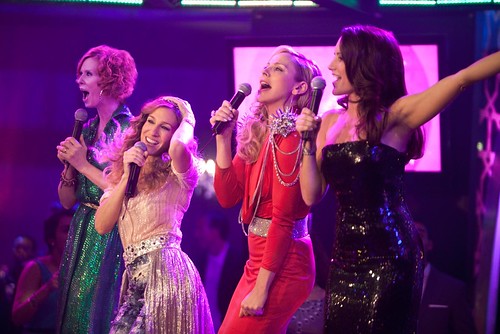 More information can be found on the Sex in the City 2 Facebook page and you can also find out how to win a phone call from Sarah Jessica Parker here.

I have not been able to see Sex in the City 2 yet. I can not wait to have a night out and be able to see it with TechyDad since he liked the series as much as I did. Listening to the soundtrack has given me a sneak peek into the movie. I can imagine Carrie, Samantha, Charlotte and Miranda strutting their stuff to the music. Of course, it also makes me even more anxious to see the film.

The music on the CD is an eclectic mixture. The sounds range from hip and today, to a middle eastern beat. You definitely can see the girls walking in the desert as pictured above while listening to songs like "Kidda" and "Euphrates Dream" as a few examples. One of the songs that I was most curious about was Liza Minnelli singing Beyonce’s "Single Ladies (Put A Ring On It)". Thanks to being a self proclaimed Gleek, this song is now a sentimental favorite of mine. After seeing Ms. Minnelli on Joy Behar’s show one evening, I ran the the CD that had just arrived in the mail. TechyDad wanted to know what I was doing. I explained that I HAD to hear this song immediately. The song is "interesting" to say the least. Not bad, but a completely different spin to Beyonce. Now I am even more curious to see this scene from the movie!

One song that sticks out in my mind was "Empire State of Mind (Part II) Broken Down" by Alicia Keys. The heart and soul, power and lyrics made it a song that I would like to hear over and over. There was also something special about the duet "Love is Your Color" with Jennifer Hudson and Leona Lewis. I can not put my finger on it, but it had a calming nature and was beautifully sung by the two artists. A sentimental favorite was  "True Colors" by Cyndi Lauper is a sentimental favorite of mine. As a child of the 80’s, this song has always been there and I love how it continues to spread its wings with new projects like Sex in the City 2. A fun son on the CD was when Parker, Cattrall, Davis and Nixon sing "I Am Woman" together. I have a strange feeling this will be a ladies night out karaoke favorite (BlogHer ’10 anyone?!).

I really like this CD and will probably appreciate it even more once I get to see Sex in the City 2 in the theaters. So tell me, have you seen the movie yet? If you have, what do you think?

Disclosure: Thanks to One2One Network, I received a free copy of the CD to facilitate this review. The opinions expressed in the review are my own.