Monday morning, I was feeling rather ambitious. I was moving out the clothing that NHL had outgrown, switching out JSL’s fall items for summer and heading down to the basement for laundry/get the next size items for summer. Minutes later, things in my little world were changing. To give you a sense, this was how I felt this morning: 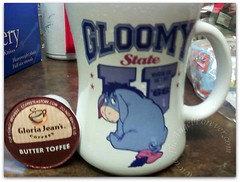 Thank you Keurig machine at Mom and Dad’s house. You are definitely my hero today! Now, back to yesterday.

When I went downstairs, I saw water on the ground. Let me rephrase that, I saw a lot of  water! Over 3/4 of the basement floor was wet. It was not deep, but I could hear water rushing. This was not in the usual spot. I immediately screamed for TechyDad to come. Much to our horror we quickly found the culprit. There was geyser of water from a pipe in the back corner of the basement.

I was freaked out and knew it was not good. I called my father and he had someone come over to help us try to stop the flow. Nada – so we called the city. They were at the house in about an hour. By this time, I was already gone. I took NHL to school and went to my parents house since we had no running water.

They eventually came and told TechyDad that it was a pipe running to our main service line and we would likely need to replace that entire line. My heart sank when I heard this. This would be beyond expensive and require a huge section of our yard to be dug up.

To make a long story short, two people came to look. The first plumber I called said they would be there in 2-3 hours. Then, my father mentioned another person to call. He was there in 20 minutes. He gave us a price. I had to get back to him after I heard from our insurance company to see if anything would be covered. Nada on that (mixed feelings after the roof fiasco just a month ago). I told him that we had another plumber coming and not to be insulted. The other plumber came and gave us a better price. The catch – they could not do the work until Thursday at the earliest and he told us we could not wait. So we went ahead, signed a contract with the first person. That check hurt to write.

The saga continued. When they turned the main water off, the water kept flowing. Yes, the river in my basement was still going and going to the drain on the other end. TechyDad went to clean up some with the wet/dry vac and saw more of a mess. As he was sucking water up, more was coming. He called the water department again. Different stories were given, the potential for our bill was getting larger by the minute. I was in tears hearing the story over the phone. Lucky for us, the two men went into the basement and they found something. There was a covered sewer pipe right next to problem pipe. Thanks to TechyDad cleaning that area, they were able to see it and removed the spot and it shot right down there

Below is a view of the leaking pipe area this morning. Looks SO much better than yesterday, but who knows what will happen today as the work progresses. 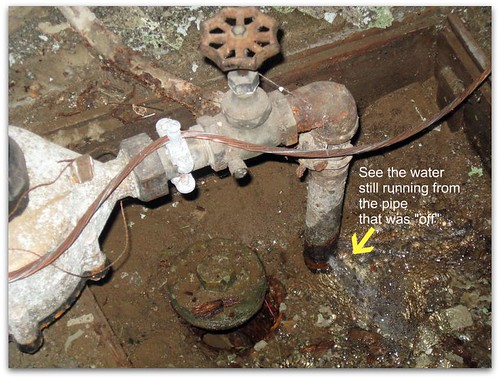 Fast forward to this morning. After 2 hours of sleep, I took JSL to the doctor and then went to our house. The power company, telephone company and numerous other had come to check in so they would know where it was safe to dig. There were several large vehicles parked outside our house. Before I knew it, this was the scene: 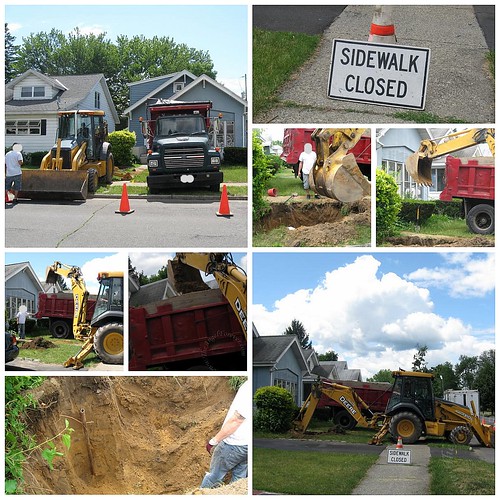 I left the house since it was raining and was told they would call if anything was needed. Now, I wait and see. With any luck, they will be able to fix it and restore the water. The box outside may also need to be replaced will will add a significant amount of additional spending on this project.

On that note, I am off to rest while waiting to hopefully hear some good news about the dig site in my front yard. Once again, I wish that dull moment would come soon.

« Sex and the City 2 Soundtrack
Beautiful finds outside »