Education funding crisis – save our school

When my son left school on his last day of first grade, we assumed he would be back there in September to see his friends, teachers and other members of this amazing school community. This assumption came to a screeching hault on Tuesday afternoon. After a fun filled morning out, I arrived home to a rather disturbing e-mail. Nothing could prepare me for this as I let out a rather frightening scream and tears fell down my face.

It seems our dear governor had pulled some powerful punches that would pretty much screw our entire school district. Rather than think about the children that this move would hurt, he kept signing off on item after item. Once again our district was being forced to make some rather disturbing decisions which may include closing one or more elementary schools, including ours.

I do believe that fire burst from my eyes as the anger increased. No, I never thought we were 100% safe until my child walked into school in September, but I NEVER expected this on going roller coaster. My son heard me and saw that I was upset. I had to explain in second grader terms that once again we did not know if his school would be opening again. My child asked me why. This was a tough one. I told him that for too many years members of the powers that be have sat back and allowed some businesses to come into our district and take children away from us. I told him that they pretend to be schools, but most of them are not. I promised him that I would do everything in my power to: 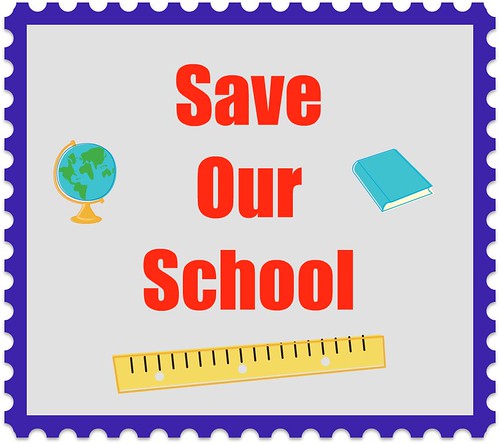 I asked NHL to go into the other room and play with JSL. I had some important phone calls to make. I started with the mayor and moved on down my list of community politicians. I left messages, talked with some people and then called a representative of our school district. I wanted to know what a concerned parent/citizen could do to wake up our community. Enough is enough! The truth needs to be heard and people need to stand together to stop the insanity. If we do not do this, not only will my son’s school be on the chopping block, but our entire public school system could be in danger. Our community needs to be the example to other parts of our state and I dare say the country. We need to get the right people to hear us and see how these money hungry businesses that are dressing up as educators are killing public schools across the nation.

Previous posts about the battle to save our school: