As a teacher, there have been times that I have gone months without reading a book that is for an adult. With so many childrens picture and chapter books constantly being published, it is hard to keep up to date and current. Let’s be honest, it is next to impossible to read everything out there. Thanks to reviews and articles published, I have heard about books that I may otherwise never know about. This is actually how I heard about It’s Raining Cupcakes (Amazon affiliate link). I was simply reading a magazine that mentioned the title and had the cover art. The subject alone caught my attention. I immediately requested the book from the library. 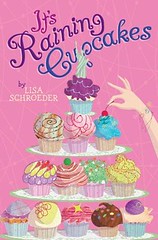 Twelve-year-old Isabel is dying to get out of Oregon. She spends her free time in the library, reading and dreaming about faraway places. When her mom decides to open a cupcake shop in their little town of Willow, Isabel feels just like buttercream frosting to a cupcake-stuck. It seems as if it will be another disappointing summer, until Isabel learns of a baking contest. If she can come up with a winning recipe, she might have a chance of competing in the bake-off in New York City! But Isabel’s best friend, Sophie, is also entering the contest, and things always seem to go Sophie’s way. To make matters worse, Isabel and her mom don’t exactly see eye-to-eye on the type of recipe Isabel should enter. In this sweet treat by popular teen author Lisa Schroeder, Isabel discovers that maybe it’s not about where you go in life as much as it is about enjoying the view from wherever you are.

When I brought the book home, NHL was intrigued by the cupcakes. Luckily, the pink cover did not intimidate him. We decided to do it as a read aloud together. It is a mid-grade novel, so I thought it would work nicely if I read. Most evenings, I read it to the family as we sat down for dinner. While we waited for our food, I could read a chapter or two and fit in 15-20 minutes of reading. There was only one evening that we changed this up. NHL asked to read more that night. He was so excited about what was happening in the story that we set up on his bed. 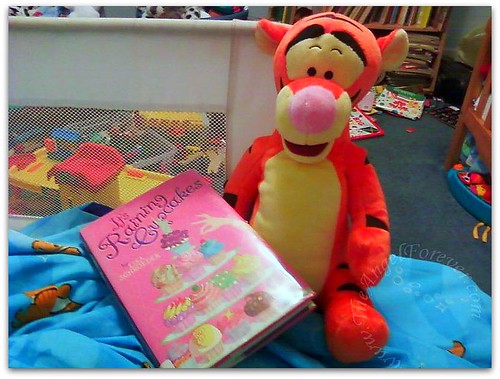 That night, I also took the photo above and sent a picture to Twitter saying that we were getting ready to read more of It’s Raining Cupcakes with Tigger. A short time later, I received a message from Lisa Schroeder, you know the author of the book. She hoped that Tigger was enjoying the book. When I showed my son the message, he was all smiles. Social Media was in action and I loved it. When I looked at Schroeder’s Twitter page, it sent me to her website. Of course, being a blogger, my eyes immedaitely saw she has a blog that she actively writes on it. I sent a message back and we continued to read little by little each day.

NHL really enjoyed the book. He thought it was fun that a cupcake variety went with the start of each chapter. He also liked to imagine what the inside of the cupcakes store looked like. Having gone to a local cupcake shop, he had something to spark his creativity. When we finally finished the book, NHL immediately started to clap his hands. This was a big victory for him. We had finished a chapter book together (he helped to read parts) and we now knew part of what happened to Isabelle and her family.

While he was thrilled with the ending, TechyDad and I debated some about it. That night (just before leaving for BlogHer), the two of us really got into why Schroeder stopped the book the way she did. I sent out a few Tweets and Lisa Schroeder saw them and replied. Then I noticed the same day that she had posted a question and answer entry about It’s Raining Cupcakes.

Within the Q&A post, Lisa Schroeder answered five large questions that many readers have asked. Question 3 was about whether or not there would be a discussion guide to go along with the book. As a teacher, these items are so helpful to assist us in the classroom. Countless times I have selected novels to read that did not have them and it is a daunting task. It is always nice to have something to spark discussions and learning in the classroom, especially with input from the author. I would love to read this with future students one day when I head back into the classroom. There are so many life lessons and ideas that could be explored with the storyline presented. Some of the deep and more emotional content would be best for early middle schoolers (these items went above my seven year old’s head).

Scroeder also addresses the ending of the book. I read her points to TechyDad and in the end, we agreed to disagree. I have to admit that I wished it had continued on, but sometimes leaving more to your mind to finish is a powerful thing. It really showed me that I cared about the characters and had connected with the book. With the last question, she also lets us know that there will be another book, this time from Sophie’s point of view and we will find out more from It’s Raining Cupcakes (which should make TechyDad and the rest of us happy).

I know that we are looking forward to the next installment of It’s Raining Cupcakes that should be out in the fall of 2011. Until that time, I will be reading Little Chimp’s Big Day, also by Lisa Schroeder, with JSL and due out from Sterling Kids in September 2010.

Disclosure: I took this book out of my local library compliments of our tax money. The opinions expressed in the review are my own and were in no way influenced by the Social Media presence of the author.