I still remember the moment like it was just yesteday. My first day in a classroom, my own classroom. Nerves would be an understatement. I felt like I knew nothing and was not sure how to break the ice with my new students. There is no doubt that I was awkward those first few days and probably even weeks, but I was learning. Teachers learn in the classroom that they teach in, and even veteran teachers will tell you that they constantly are taking in things with the new classroom dynamics that they face each year. 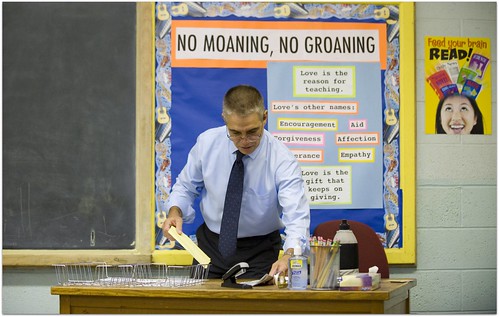 That first year was a tough one. My students challenged me and I had to learn the politics within a school (politics are rampant in all schools – don’t kid yourself). I pushed myself to create innovative hands on learning experiences to actively engage my kids. Yes, as the days went on, my students were my kids. I thought about them inside the classroom and outside. When I was at home, I was constantly thinking about ways to connect my subjects their lives. At the same time, I had to earn the respect of parents. As a young teacher, many questioned my experience. Sure, I had been a substitute teacher for a while, but this was an entirely new world. Now, it was my responsibilty to communicate to parents. My anecdotal record book kept track of phone calls home to families about concerns, and also praise about things that I saw. My e-mail and websites were other ways that parents could keep in touch. Of course, the most important part of my first year were the mentors in my world. The other teachers in the building took me under their wings and helped me through this year. I learned from mistakes and fine tuned lessons to use from that point on as I would never again be a first year teacher.

Enter Tony Danza. Yes, THE Tony Danza from "Taxi" and "Who’s The Boss" fame. Tony went to college to become a teacher long before his Hollywood success. His life path changed and the entertainment world became his career. At 60 years old, he is looking at how to make a difference in the world and wanted to head into the classroom to teach for the first time. Teach: Tony Danza premiers this Friday on A&E 10/9C. 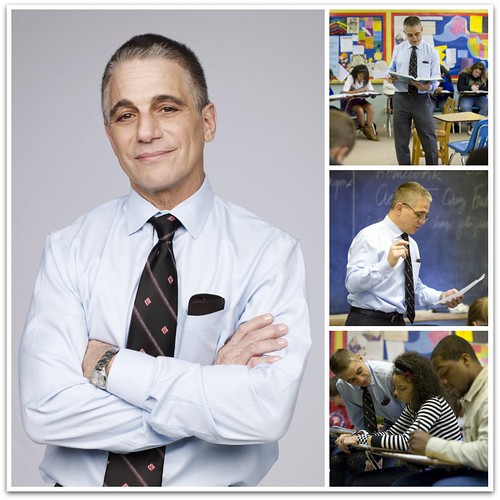 About Teach: Tony Danza on A&E

Long before his iconic acting career, which includes roles in “Taxi” and “Who’s The Boss,” Tony Danza received a degree in History Education. During the 2009-2010 school year, he took on his most challenging and rewarding role yet as he stepped into the classroom as a full-time teacher at Philadelphia’s Northeast High School. “Teach: Tony Danza” follows the first year-teacher as he instructs a 10th-grade English class with 26 students in back-to-back 45-minute periods.

The series will look at the challenges Danza faced and the rewards he experienced as a first-year high school teacher. Under the watchful eye of Northeast Principal Linda Carroll and in-classroom teaching coach David Cohn,

Danza applied incredible creativity and ceaseless dedication in his day-to-day tasks of planning lessons and executing them in the classroom, administering quizzes and exams, grading homework, eng aging in small learning communities with other faculty, and meeting with parents. Beyond the real-life duties of teaching, Danza took on quite a few additional roles outside the classroom including helping the football team, the band, and the debate team, and organizing a successful fundraiser for the school. And he became a true member of the Philadelphia community, partaking in events with the mayor, singing the national anthem at a Phillies game and lending his support to a variety of charity and fundraising events.

Mr. Danza arrives at Northeast High School in Philadelphia and meets most of the faculty, including his teaching advisor, David Cohn, and ball-busting principal, Linda Carroll, who warns Mr. Danza that if he screws up, he’s out. On the first day of school, he meets his diverse class of students, but soon learns that teaching is harder than he realized when one student questions whether or not Mr. Danza is qualified to be teaching anything. And, in an attempt to bond with two of his students on the football team, he becomes an assistant coach.  He then realizes he knows far less about coaching football than teaching English and questions whether or not he made a mistake becoming a teacher.`

After half the class fails their first quiz on “Of Mice and Men,” Mr. Danza fears that most of his students aren’t doing their work. As a result, he risks legal repercussions when he denies three of his “special needs” students the use of the resource room because he thinks they’re being lazy. And to make matters worse, Mr. Danza’s brightest student wants to drop out of his English class because he isn’t being challenged enough. Pushed to the limit, Tony breaks down in tears.

Here is a preview of the show:

As an educator, I was intrigued with this this show. I was curious how Tony Danza would interact in the classroom and what problems he would be faced with. The reality is that, even as a celebrity teaching 10th grade English, Danza was hit with many  items that other new teachers have. While in front of students, he showed his nerves. He saw how difficult it is to manage time within a class period and he learned how easy it can be to talk too much. Within the first episode Danza also realized, with the assistance of his mentor David Cohn, that sometimes you need to step back. The awkward silence in a room may be tough to take, but feeding students answers does not help them to learn. Finding the balance within a classroom to keep the attention of students, while also providing an authentic learning experience can be difficult.

Tony Danza sees in the first week that teaching is tough. He is touched by the parents that reach out to him at a football game. It seemed like he was not expecting this to happen and it hits him hard. He seems genuinely concerned about whether or not he can do this. I think most teachers question this at one point or another. This would probably be why so many educators leave the profession within their first five years. Wise words from principal Carroll remind Danza that you are not born a teacher, you evolve into one. AMEN!

I know that my DVR is set to continue to watch "Teach: Tony Danza." I want to see how he focuses on the task at hand, reaching his students and making them the best that they can be. I also want to see how vital his mentors are in making him settle. From this short glimpse, I think the show will be an eye opener to Americans about the real world of teaching and the hurdles that educators must face within the day with their children. I also believe that the timing of this show is nice given the enormous need for Educational reform.

Disclosure: I am a Lifetime Mom affiliate. As a part of this, I was offered a screener DVD  of "Teach: Tony Danza" to view. No compensation was given and the opinions expressed in the review are my own.