There seems to be a lack of time recently. Each day starts off with a list of items that needs to be done, but something always comes up. Case in point. Yesterday, I took JSL to nursery school. He was not feeling the best, but was not SICK, if you know what I mean. Just like big brother, when JSL is fighting off a cold his asthma kicks in. This makes him clingy, tired, and off. To make a long story short, I managed to leave the school (literally pulling him off my leg), get around the block, and suddenly I saw a familiar number on my cell phone ID. It was the nursery school director. She had a hysterical JSL in her office.

I went into the school and knew that my son was not really sick. He is fighting off a cold just like half of the kids in his class. His nose was running and he was coughing from non-stop tears. When I arrived, he perked up immediately. The first thought in my head was that this was a mistake. We were letting a three year old think that if he cries and has a fit, I will automoatically appear. I took his temperature and it was 97 (he has a very low normal temperature). After many more tears about leaving, I finally took JSL home. I set him up on the couch to rest, but he did not sleep. He wanted me next to him. So there I sat snuggled up with my little guy. While he watched cartoons, I finished listening to The 19th Wife on my MP3 player. Those articles for Kids Fun Plaza NENY will have to wait for another day. My little guy needed me. As we were walking to school to pick up NHL yesterday, this was JSL. 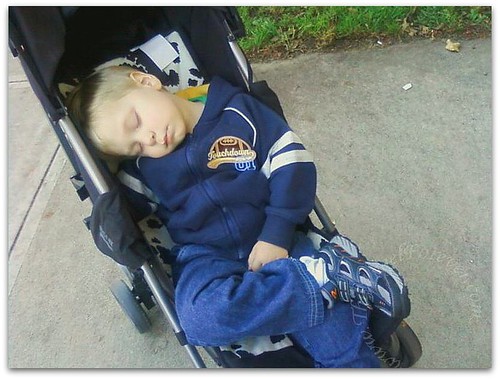 He fell asleep with a Doodle Pro in his hands while I was walking and talking with another mother. Yes, he was one tired little puppy.

Although there may not be enough time in the day to get my writing done ahead of schedule, have a spotless house, exercise (need to work on that one), and do research on Gifted Education, at least I know I am here and ready to help my boys if/when they need me. Everything will get done, but a time out for snuggles and hugs may be required first.