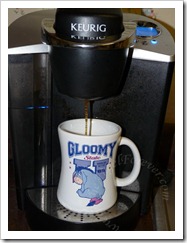 Just before I met TechyDad, I gave up caffeine over the summer. As a college student, I had become overly dependent on Mt. Dew for breakfast and any other time of day. This constant influx of caffeine (and likely sugar) had caused my body to crave it and resulted in massive headaches. The week I stopped drinking caffeinated beverages was VERY difficult.

Once the caffeine was out of my system, my headaches stopped for many years. Over the last year or so, I noticed the headache pattern was returning. Mr. Migraine was back in full force! One of my doctors suggested some migraine medication, but I was not a fan. A prescription that I tried years ago literally made it so TechyDad was not sure if I was alive. It scared both of us. The doctor then suggested trying something like Excedrin Migraine. I was hesitant because of the caffeine content, but became a believer because it worked! 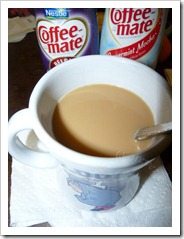 Soon after that, I tried some coffee at my parent’s house. They had a nifty new Keurig machine and it intrigued me. I noticed that on days where I had a cup of coffee there, the headaches stayed away. Hmmmm….   Although I was not a fan of the caffeine, the small amount keeping away the larger pain seemed well worth the trade off.

There were days when I would run over to my parents house to visit their machine because I could feel the headache coming on. Most of the time, if I caught it quick enough, the coffee would work. TechyDad does not like coffee. We have a coffee machine that we have never opened. I secretly wished for my own Keurig machine, but could not see spending the money on something that would mainly be for me. Each time I heard about Keurig giveaways on blogs, I would enter.

Most of the time there would be hundreds of entries and I never once thought too much about it. Then last weekend I was looking in my spam e-mails. There was a message from Jennifer of The Dirty t Shirt. After reading the note, I ran to tell TechyDad. Yes, I won Jennifer’s Millstone Coffee and Folgers Gourmet Selections K-Cups and Keurig Single-Cup Brewer! Much to my surprise, a rather large box was waiting for me when I arrived home on Friday. Inside was the following: 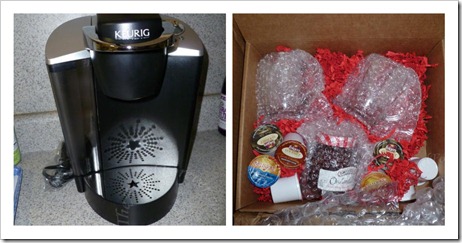 My parents joke that they will never see me again now that I have my own Keurig. I laugh at them and blame them for making me like the machine so much. I will say, I really enjoyed waking up and having a cup of coffee at home whenever I wanted it. Certainly made for a nice Sunday afternoon.

So, on this Monday morning I ask you, are you a coffee drinker? If you have a Keurig machine, I would love to know tips on places to purchase K-Cups.