Rewind to almost six years ago. I was the mother of a three year old little boy and was busy teaching and trying to battle morning sickness. I was pregnant with my second child, waiting to find out if NHL’s sibling was going to be a girl or boy. There were many reasons I wanted to know, but one of them was to buy big brother his own baby to take care of. I wanted the baby to be the same sex as mine. When we found out that we were expecting another little boy, the hunt for a baby boy doll began. We eventually found a baby boy doll that NHL named several times. Eventually, Howie Harry stuck. 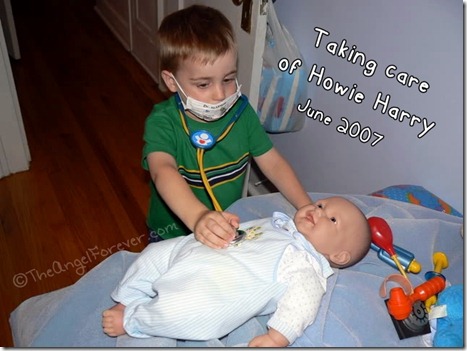 Last year, JSL declared that he also wanted a “Howie Harry” baby to take care of. At nursery school, the kids were playing with dolls and he often felt left out there and wanted a baby to take care of. Problem, there were very few boy dolls to find that were reasonably priced. Eventually, NHL offered to loan Howie Harry to JSL. This worked, but only for a short time.

Just before going back to school, JSL started to beg, cry, and say he would do anything for a doll. There was a difference this time. He did not care if the baby was a boy or girl. He simply wanted to be a Daddy to a doll that was his own. We tried to distract this desire, but it was not working. JSL fell in love with a doll that he saw at Toys R Us a few weeks ago. TechyDad and I finally agreed that we would get JSL the baby that he really wanted. It was a very early Chanukah gift, but he has his baby and loves her. 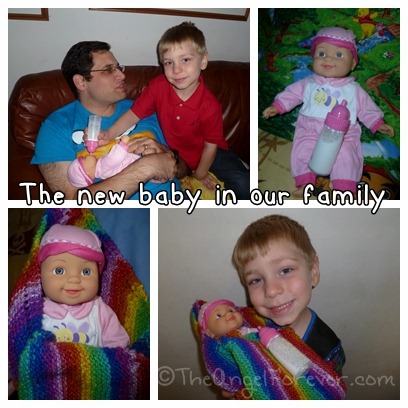 Many may ask why JSL needed a doll since he is a boy. My answer is simple, it meant a lot to him for a very long time. He wanted to take care of something like a Daddy and it does not hurt anyone, so why not?!

My question to you this week:

Do you have any name ideas for JSL’s new baby girl? He is having a hard time naming her. He wanted to name her Howie Harry, but we insisted that was a no-go. Perhaps something you suggest will be one that he adores.