Kindergarten Star of the Week

The weekend before break, JSL came home from kindergarten with a bag from his classroom. It was to announce that it was his turn to be Kindergarten Star of the Week. On Monday, he had to bring in some items that would fit into the bag to share with the class. It could be toys, a book, and other items that had a special meaning to him. In addition to this, JSL had to decorate and fill out a Star of the Week poster. He would share this with his classmates and after it would be on the door for everyone to see.

Since TechyDad and NHL were busy finishing up a Native American project for fourth grade, JSL and I went to Nana and Papa’s house to use their kitchen table. We brought pictures, stickers, glitter, markers, and crayons along with us. 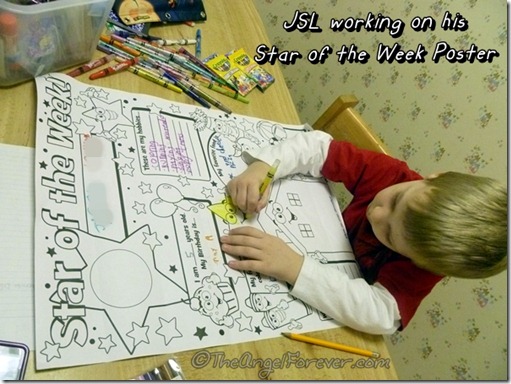 As you can see, the poster was really quite large. There was a lot to color in and fill out. JSL had fun answering the questions and planning how to decorate the poster. He really got into it and wanted it to be just a certain way.

First, JSL filled out his name and birthday. After that, he wrote that his favorite color was blue (no shock there). When he grows up, he wants to be a Dad. His hobbies are coloring, running, playing Nintendo, singing, and doing crafts. JSL’s favorite food is Mac and Cheese and Pizza (ultimate favorite Cici’s Mac and Cheese Pizza). Oh and JSL’s favorite sport is hockey.

When he was finished with everything, this is what JSL’s beautiful posted looked like: 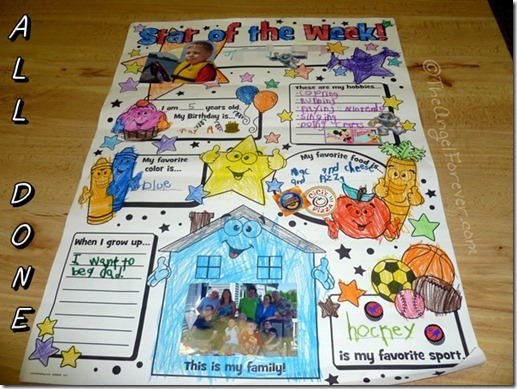 Have any of your children done a Star of the Week poster like this for school? I would love to know what they wrote and shared with their class.