I have a confession. I used to laugh at TechyDad when he would watch Doctor Who. While he would head off to watch that, I would concentrate on knitting/crocheting and catching up on something like Downton Abbey. Then something happened one day. I realized I was intrigued with Doctor Who. While the music annoyed me from a distance, the geek fest made me curious when other friends were into the show. Plus, it was a way to share something with TechyDad and still be able to avoid Hobbits and the like.

While TechyDad was able to convince me to watch the show, the boys were not interested. They would protest and resist. For Father’s Day I wanted to get something Doctor Who for the boys to give to TechyDad. While searching online, I found the When’s the Doctor book (illustrations by Jorge Santillan). 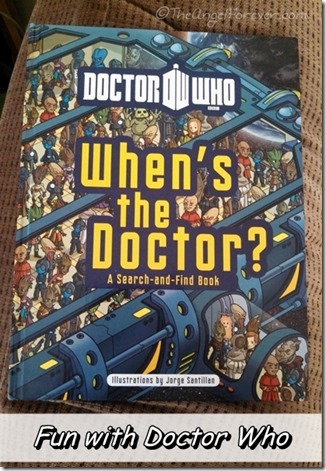 Yes, the book is basically a Where’s Waldo-esque seach-and-find book with Doctor Who references. While it was a juvenile book for TechyDad, I had an ulterior motive. In the back of my mind, I was wondering if this book could connect with our boys and get them interested enough to become Whovian. At first, the boys were oblivious and did not really care. Then, as we made less of the book they were more attracted to it. When the book went with us for the ride to the lake over the holiday weekend, NHL kept asking TechyDad about items within it. 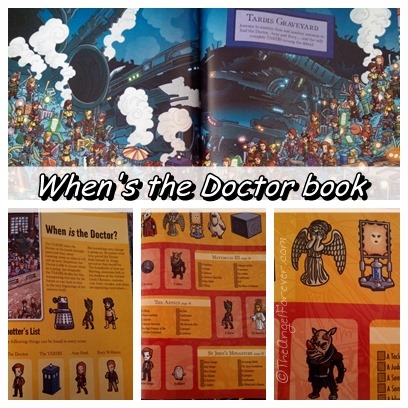 NHL and JSL were curious why we always say “Don’t Blink” when we see statues. They liked to pretend to talk like a Dalek, but they had never seen them in an episode. Well, my experiment may have paid off. While JSL (6) has said for a while that he was interested in watching Doctor Who, NHL (almost 10) was holding out.  That was until the other morning when he told me he wants us all to sit down and watch the first episode of Doctor Who together.

Yes, we will go back to visiting the Ninth Doctor with Christopher Eccleston from 2005. The kids will get to meet Rose, Casandra, The Face of Boe, Daleks, and many more Doctor Who staples. Of course, if we are lucky they will work their way slowly to meet the Tenth and Eleventh Doctors. Not only will they see David Tennant and Matt Smith as The Doctor, they will get to experience other companions like Martha, Donna, Amy, Rory, and Clara.

Have you ever used books get your children interested in something that you enjoy? As always, Tuesday Tales is all about sharing our love of books. Please let me know what you have read recently. Be sure to link up to your book posts in the comments below. Include something you read on your own, with a child, or someone else.