Doctor Who Birthday Wishes for TechyDad

While I do not typically post anything new on Saturday these days, today I had to make an exception to the rule. You see, today is TechyDad’s birthday. While our plans are still not entirely set, I do know that the boys and I are going to make sure we have fun celebrating his special day. We will begin by officially giving him his present. 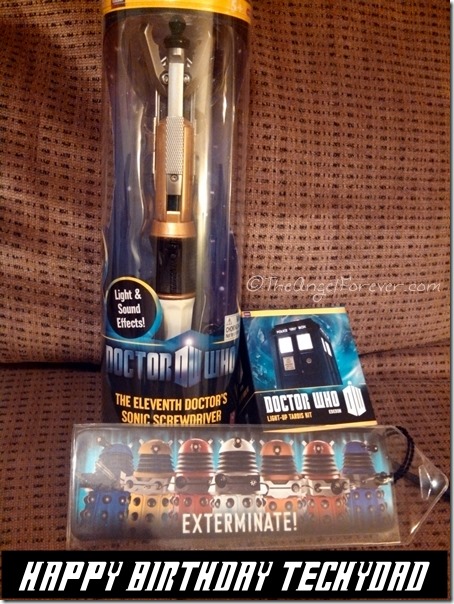 The present is not a surprise. For quite some time, TechyDad has said that he really wanted a sonic screwdriver. In the time before I started Doctor Who with him, I really had no clue why this meant so much to my geeky husband. Then, as I started and quickly finished watching the new Doctor Who seasons with him, I started to get it. While the little toys that he had were fun, a true Doctor Who fan must really have their own sonic screwdriver. Simply knitting one for him was just not going to cut it. I can make those for the boys.

I finally figured I would surprise him buy purchasing a sonic screwdriver. Then, as I was talking to a friend, she asked me which Doctor was his favorite. While I was pretty sure he was a big fan of David Tennant as the Tenth Doctor, I wanted to make sure with such an important geeky purchase.  So I casually asked TechyDad which was his favorite doctor. His exact comment back to me: “Well, I like the Tenth Doctor the most, BUT I like Matt Smith’s sonic screwdriver more.”  Ooops, so I needed the sonic screwdriver for the Eleventh Doctor! Guess it was pretty obvious, but I had no real choice since I waited too close to his birthday.

We all went out the other night and picked up the sonic screwdriver above. In addition to this, TechyDad asked to get the light-up TARDIS for his desk, and I had to get the Dalek bookmark. Daleks are special in our house because they are what intrigued that boys with the show enough to finally start watching it.

So to TechyDad, I hope you have a wonderful birthday and we make many family memories celebrating your special day. I am sure your Doctor Who collection will continue to grow once we find a few more of the items that the boys and I wanted to get you. Thank you for being patient and letting me slowly become a Whovian who now loves to crack jokes all about Doctor Who and the crazy stories within the show.