Just over fifteen months have passed since the world of braces became a reality for our family. NHL has had wires on his top teeth since the end of June 2013. 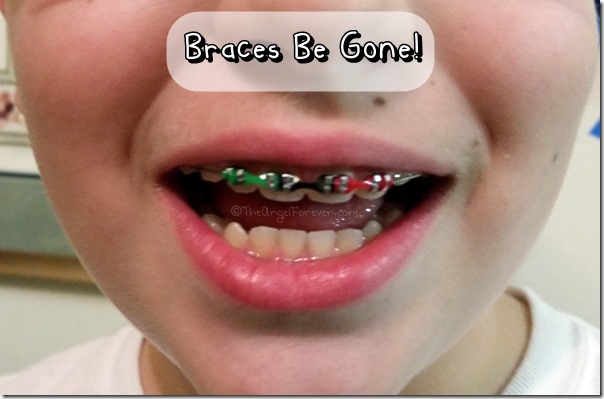 While NHL has had some discomfort from time to time, we only had a few issues that were caused by pesky baby teeth trying to vacate his mouth. Over the months, we had to make two extra visits, and one emergency night trek to the orthodontists office. My kiddo was a trouper with what they did in his mouth and rarely complained. When he did in recent weeks, we knew something was up. A spring had sprung and was digging into his cheek. That resulted in his two front teeth shifting forward. For a few weeks, we were not sure if the braces would still come off as predicted.

The weekend before a scheduled recheck NHL had his first wire pop. Of course, it was after 8:00 on a Friday evening. We called the orthodontist and he tried to explain how to shift it back into place to try to wait until Saturday afternoon. When we tried to do this, the wire popped out even more and NHL could barely close his mouth. So we met the orthodontist at 9:30 that evening. Even at that hour, he was amazing. We were given good news that NHL’s teeth had gotten back into the right position and the braces would still come off on October 6 (TODAY). A stronger wire was put on and we were told that it could not and would not pop.

Care to guess what happened next?

Yes, Saturday morning NHL came running into our room. As he was trying to wiggle a loose tooth, the giant wire came out from the bracket. The message for the orthodontist was pretty classic and one he will likely remember for a while. Wire cutters were bought and never used from Home Depot. Then, after a few hours, NHL figure out how to prop the wire up where it would stay and did not hurt him. Score! We were able to wait until our regular appointment two days later.

Once again everyone in the office was amazing. The interesting part, nobody has a clue how the wire came out of place and did not break the bracket. Go figure!

Now we have made it the last two weeks without another incident and NHL is already planning what he is going to eat once the braces are removed. He has been amazing with following the instructions/rules set. We managed to avoid other more invasive techniques to expand NHL’s palette, fix cross bite issues, and work on the tooth crowding. Thank goodness the braces did their magic with the amazing work of our orthodontist. Now, NHL will be wearing a retainer until it is outgrown and then we will see if a Phase 2 of braces will be needed. A lot will depend on how some of the last teeth fall into place.

So I would love some advice from those who have had a retainer or had a child with one. What tips and tricks do you have to make sure they are taken care of properly at school, worn, and all that other fun and important stuff that I am unsure of?

P.S. If you are looking for a fantastic orthodontist in the Capital Region, just let me know. The office that we go to is amazing to work with and everyone is so understanding with children that have special needs.

« Middle School is Just What the Doctor Ordered
Time for Sukkot »