I have a struggling, reluctant reader. He seems to have better things to do with his time than read a book. When it’s time to sit down and read a book, he will do things like

So, thus far, my motto has been "If he’ll read it, I don’t care." And we have had very, very little luck picking a book that will keep him interested long enough to actually work on reading skills past looking at the pictures. A few months ago, I was at a book fair and came across a book that I had heard about and never really dug into. This was for no other reason than I had been reading other things. I found this: 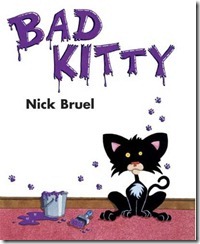 I figured a cat that looked like one of ours, doing insane things would at least get the Shrimp’s attention.

WARNING TO ALL WHO HAVE NOT READ THIS BOOK BEFORE please pre read this book, as you will not be able to share this book with your child without laughing hysterically .

The initial Bad Kitty by Nick Bruel is what seems like a simple ABC book where Bad Kitty runs out of her favorite foods and her owners try to feed her healthy foods. That goes nowhere well, as Bad Kitty does things that are just so naughty-like tip over her litter box in protest. This book had us in giggles until it hurt. Isaac tried to read some of the words himself without prompting, which was new to us! So, since this book was such a huge hit, I figured I’d try to find more in the same vein. Whoah. Wait. There are MORE in the Bad Kitty series? Wait. They are CHAPTER BOOKS?! Oh, thank you, thank you, thank you! Our next stop was at the library to test these out. We found this: 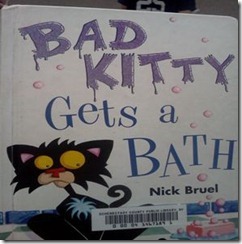 Isaac immediately asked to check it out and if we could read it when we got home. We read it through in a matter of two days. It was one of the most reading heavy weeks we’ve had since the real reading instruction started!

The book is picture heavy, yet still full of words that are decodable. The chapters are short, and have produced a serious sense of accomplishment with Isaac, because he can read two chapters in a night. Then, there’s the fun factor. The pictures and the type are just a real joy to read. They engaged Isaac quickly and kept him going through the book. He loved the search for Kitty to get her into the tub.

These books are my favorite for reluctant readers. The vocabulary is not intimidating, the pictures help when the reader is a bit lost in the emotion of the story, and Bad Kitty-she’s just funny. It is the only series of books that have us running back to the library for more.

Now, please excuse me. I need to go listen to Isaac read Bad Kitty Vs. Uncle Murray and try not to spit soda out of my nose and ruin the library book.

Check out the video trailer here for the series. Classic!

Laura is a mom, teacher, knitter and a former Disneyland (ANAHEIM!!) cast member with a penchant for Star Wars. She always wanted to be a Jedi when she grew up. Come visit her at My 3 Ring Circus of a Life, where she details all of the stuff she can’t make up.

Time for an adventure of the unexpected kind!

Hello all, I would like to introduce you to my friend Kileigh7. We have known each other since elementary school. We met thanks to our two Girl Scout troops coordinating events together. Lots of happy memories from our childhood and college years. Now as parents, we bounce ideas about raising boys off of each other. Thanks to Kileigh7 for her guest post!

I’ve been on an adventure for two years now. One that I can follow the trail back to the beginning of, but one I never, ever thought I’d be on. Yet, here I am.  On this adventure. What adventure? I think to tell this story, I have to rewind to college. I was peeking around for a few things to do and a friend of mine suggested I accompany her to a hockey game.  It seemed like a good idea, so I went.  It started a trend where I would bring people along with me.  I would hang with a few people with season tickets (including the owner of this blog!) and would giggle at those with the best  display, including a woman who had a referee on a pole that she would swing for a bad call. The view from my seats used to look like this:

When I started dating my other half, I half dragged him along to hockey games. I soon converted him into a hockey fan.  I even found hockey on the west coast-dragging poor Doug to Ducks training camp.  Hey-I was on break. Thank you Year round school for giving me time off during training camp season!

So, it was no shock that when we had Isaac, hockey was planned to be a huge part of his upbringing.  One of his first pairs of pajamas was a "hockey bear" print.  We had all of these grandiose plans to introduce him to the Ducks and take him to Ducks camp. That didn’t happen. Not at all. Why?

Dang. There went the plan to turn my child into a hockey fan. Oh, well. There’s always next season.

And then we moved back east.  Back to the home of minor league hockey. It was then that I decided it was high time that I took my child into the winter past time that keeps me sane.

Opening night. My annual tradition. I size up the team, see if any of the players trips over a carpet during intros (Yes, that happened.) and generally get my hockey on. That fateful night, everything changed. I asked my then 5 year old if he wanted to go down on the ice and participate in the autograph session.  His eyes lit up and I left my other half and my parents and signed the waiver forms for me and the small boy.  He brought his mini goalie stick and we got in the lines, with the intrepid help of  a few friends. Then, it happened. He went and met one of the goalies who saw his mini stick and asked if he liked hockey (yes.) and if he was going to play (huh?) and if he was going to be a GOALIE. I thought I was going to die when the resounding  "YEAH!!" came from Isaac’s lips.Please realize, my child has PT. He has low core strength, wears leg braces and has a turn in of his legs. I had no idea how I was going to whap this out of his head.

Curse you, Goalie!! Curse you!!

The next morning, Isaac came to me and told me that he wanted to join the team. I quickly outlined the main problems with this theory:

1. Age-he was 5. 2.Stature-a bit short and light. 3. The biggest problem-Not able to skate. He wandered away and came back and asked to learn how to skate.

What? Learn to skate? Oh, boy. We’d barely mastered soccer. How are we going to skate!?

Oh, well. I wasn’t in love with the whole soccer experience, so let’s go…

So, after several phone calls and the promise of loaner gear later, Isaac was signed up for "Learn to Skate for Hockey."

Wait-Did I just… Yes, I did. I signed my child up for hockey.

Soon, we were in the throws of gearing up. I was also learning things I never, ever thought I’d need to know-like how to fit a hockey stick. I was also beating off comments from family and friends that ranged from me being completely and totally out of my gourd to inquiring about the ins and outs of my dental plan.

Sooner than I thought, Isaac was on the ice and learning how to skate in full hockey gear. On a bucket. Gripping his stick like someone would steal it if he even thought of letting it go.

Soccer parents screamed at the kids (even at the Kindergarten level!) and it was just high pressure. Here we were in hockey, chatting with everyone, drinking really bad coffee and laughing at our small bobbleheads on the ice. It was a totally different vibe.  We discussed everything from work to the program itself and then onto travel mugs that worked in the icy  conditions of what came to be known as "rink freezer."

It was refreshing. It was fun. It was a good way to spend a few hours out of my week.

More importantly, Isaac was loving it. He was a part of a team. He was learning to follow someone else besides us and his teacher. He realized what Mommy and Daddy loved so much about hockey and why we were desperate to bring him along with us.

When this season rolled around, it was all about getting back into hockey. He  was beyond ready. He had his base skills-could sorta skate, stand on his own, and sorta hold his stick properly.

he was all about improving. It didn’t hurt that he found out that his buddy from school played the level above him, and he could join him next year if he did well enough!

The parents? Still the best ever. We again, drink bad coffee, freeze in rinks, share photos  and get up at the break of dawn, as ice time is beyond early.  We still all laugh at our kids and cheer them all on.

But the smile under the face cage?

makes it all worth it.

Oh, and for those that want to know-

To properly fit a hockey stick, it needs to be up to your nose in bare feet and to your chin in skates.

Thank you again to Laura for a look at life as a hockey mom. Please be sure to stop by her blog and say hello.