Day with my boys and tubs galore

Pre-fun and excitement this evening I was working on this blog entry. So now I’m going to really tackle it since I never got more than a sentence before the fun began that was described below.

This afternoon the boys all went outside for a walk while I was getting myself ready to head out. Of course JL took his camera with him. I’m glad he did since he got some really great shots of the two boys together. Here’s one of them:

Of course the smiles didn’t last too long. Poor NHL was running to the car when I was heading out and fell right onto the concrete. This caused hysterics from scraped knees. We couldn’t stop him outside and after numerous attempts had to go inside. JL finally got NHL to calm down and we went to lunch and then tried to get new sandals for me. My favorite sandals had the bad luck of my water leaking on them when I went to the hospital to have JSL. No such luck finding anything. We wen to Kohls and Target and nothing. We did get several outside things to have for the house to use with NHL that should be a lot of fun. One is for the hose and the other a soccer net.

After this we went home just long enough to regroup and head back out to Sams to shop with my parents. NHL went up with them and we met them there. JSL refused to nurse –> fell asleep, so I pumped to take some with us. We shopped there and then went to Babies R Us to get Avent shields to try when nursing JSL. I have the Medela ones and am not in love with them. They work, but the reviews all say the others are better. After that we went to another Target to look for a few items. While looking for more bibs for JSL I noticed the baby tubs. We never had one when NHL was a baby. We lived in an apartment with a tub that was great for giving a baby a bath. Our old house is not going to work. Up to this point JSL has only had a sponge bath at the sink. So I showed JL one of the tubs that was only $17. We opted to try it since it said it fit in the sink and had a drain, plus it was for infants and toddler.

OMG – this was the best $17 I have ever spent. We gave JSL his first tub in it tonight and it was great. It has a sling in it for the baby to be supported on and it’s amazing. Here’s a photo of the little guy in the tub (please ignore the stuff in the background):

He wasn’t happy at first, but after a while he was cooing and relaxed. He really likes it when I flip him over and rub his back. After the tub I took him into the changing table room and put moisturizer on him and gave him a massage. He was so happy. Here’s a photo of where the little guy has been sleeping ever since (almost 2 1/2 hours now – heck he slept through puke-fest): 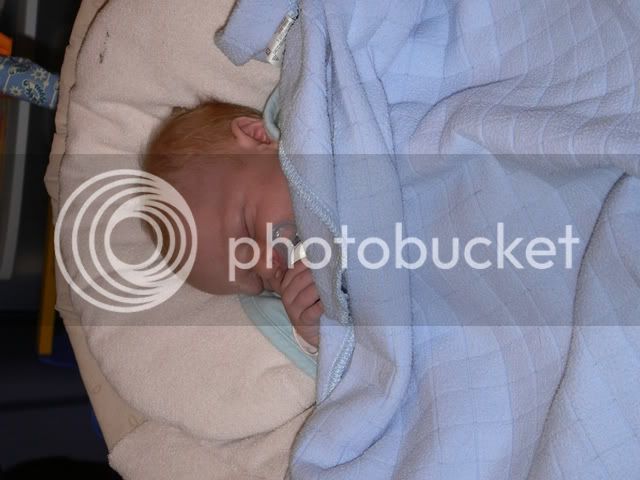 On that note I best be off to help JL to check the laundry that I put in. I am going to do the pillows in the morning. I’m sure JSL will be up soon to nurse.