Once upon a time, in a galaxy far away, I was a carefree young girl who would go hiking with neighborhood friends. I remember the views were amazing, the trail was fun, and the memories big in my heart. For years, I have been saying to TechyDad that we should go to Thatcher State Park and walk on the Indian Ladder Trail. This weekend, with no notice, we packed the boys into the car for the ride and adventure. 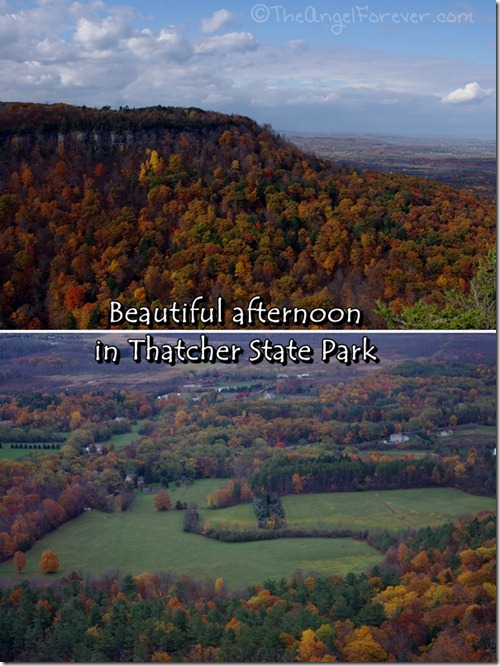 It has been a LONG time since I went to Thatcher Park. I never took TechyDad there before we started our family. My guess is that it has been at least 15 years. A lot has happened in that time. I got married, became a teacher, had two sons, and started to worry about things that never would have bothered me. When we arrived at Thatcher State Park, we parked the car and set off to explore. We were on a mission to find the Indian Ladder Trail, but were not sure if we were going to attempt it. 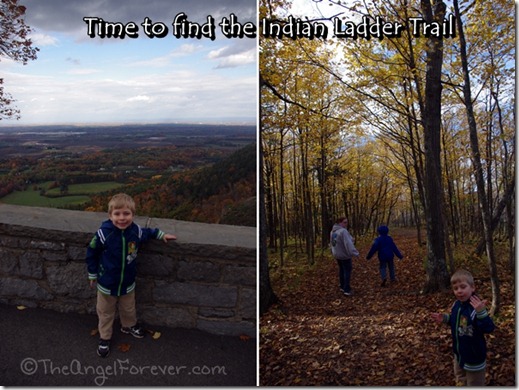 The views along the way were breathtaking, but I was a little preoccupied at times. I had to watch to avoid the mud covered in leaves, divert the kids from other items, and make sure that they stayed away from the ledge. I do recall listening to JSL chant how it was the best day ever because he was walking in a forest. He would have just enjoyed going along these simple trails, but we were on a mission to get to the Indian Ladder Trail that I had been talking about for years. 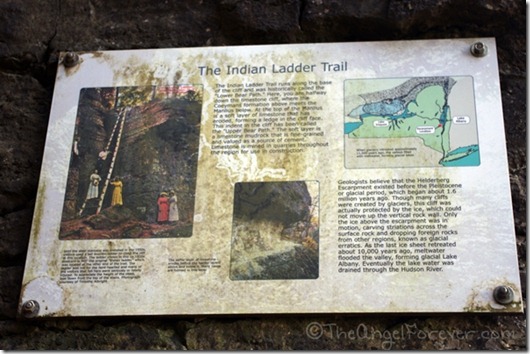 I swear that the sides seemed much different before I was a mother. Suddenly, the edge of the mountain looked a lot closer to where the trail was. It was all so very different. Way back in the day, this view would not have sent me into a mild panic. 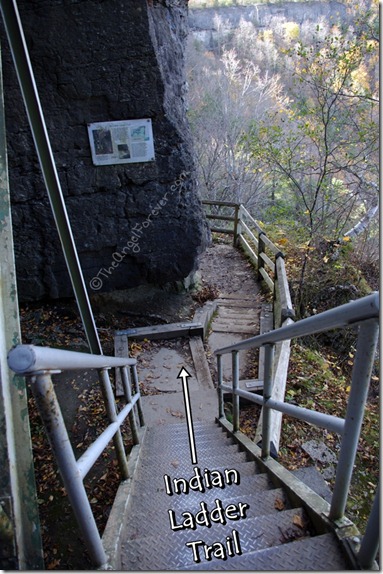 This was just one of the crazy sets of stairs that I don’t recall being this steep when I was 15+ years younger. Of course, in those days I was not traveling and in charge of two of my own children. I really do think that that made a major difference. If you look at the far end of the photo above, you will see mud, wetness, and leaves. This certainly added a new level of excitement to the trail.

Honestly, it wasn’t that bad. It was just different. Had the trail not been as wet and slippery, I probably would have enjoyed the beautiful colors and two amazing waterfalls a bit more. Still, we stopped for photos in places I remembered. 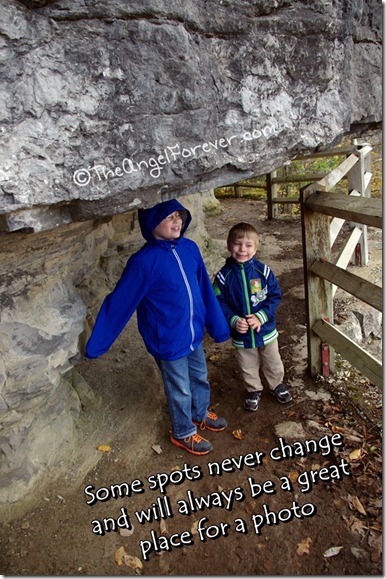 We all were amazed with Mother Nature’s beauty on this autumn day. Not only were the colors probably the best for viewing, but the water falls were rushing like I had never seen. 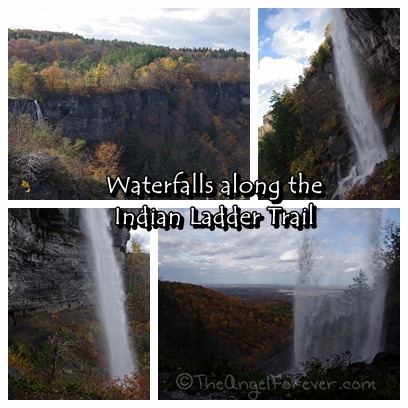 There is a lot more to share, plus I have a feeling we will be going back to Thatcher Park again, perhaps before the winter. Of course, the views will not be the same, but the natural beauty and new knowledge of the trail with kids will make our next adventure even better. 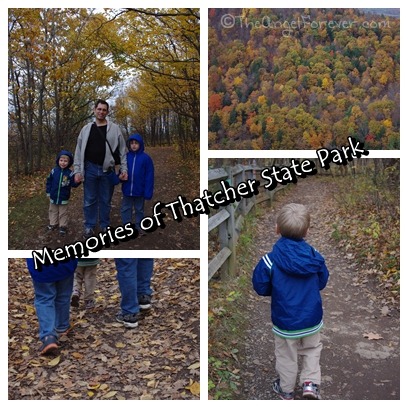 Have you ever been back to a place that is very different than you remember it as a parent? I would love to hear your thoughts and memories.

As a child, I have strong memories of playing parachute games at school and during girl scouts. The parachute we used was huge. Lots of girls from our troop and others could gather around it to play games, run, jump, sing, and have a great time. Fast forward to this summer when I won a parachute from Let’s Play on Selfish Mom. On Saturday, we had a party to share the Unreal Candy (more on that soon) that we had received. Since the weather was beautiful, we packed up the scooters, helmets, parachute, and some other outside toys. 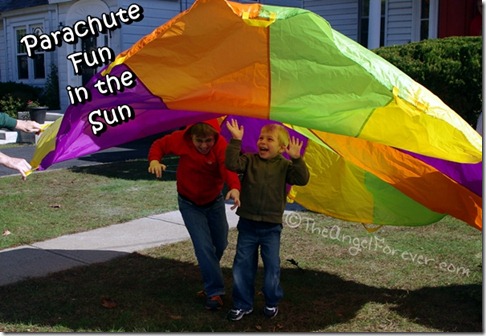 The kids all had a great time playing with the parachute. I actually wish I had taken some time to research some parachute games for them to play before we arrived. Unfortunately, I forgot to do this. Thank goodness, kids have great imaginations. They were able to make things up. Once back home, I looked on Pinterest and found a bunch of games that I remember playing as a child. Kid Activities had a great variety, but Woodlands Junior School had fantastic photos of their suggestions. The kids actually managed to do some variations of two of them, and added a new superhero approach. 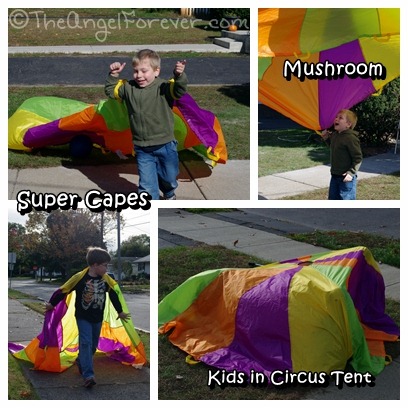 We tried a variation of popcorn, but the balls we had were too big for the parachute. Next time, I will make sure we pull out some bean bags or other smaller items to use. Of course, the parachute was also a great place to sit down and watch the kids as they were running, jumping, and playing together for some fun in the sun while the sun was shining. 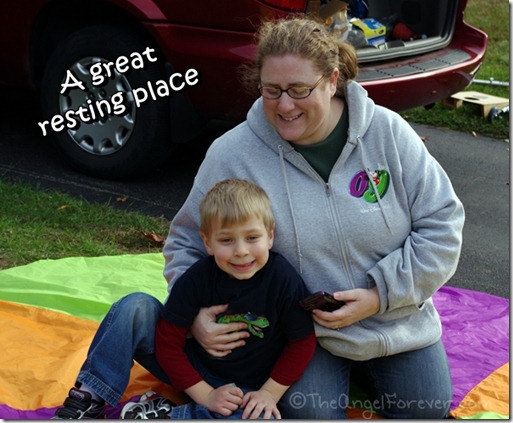 Have you ever played parachute games as a child or with your children? I would love to know what you have done so I can add to my list of possibilities for when the weather cooperates.

Dear PicMonkey, thank you for keeping me entertained while having my coffee on National Coffee Day. Seriously, the timing on your release of the Halloween effects could not have come on a better day. Early Saturday, I decided to make myself into a witch for my October profile picture. Note to the peanut galley: NO COMMENTS! 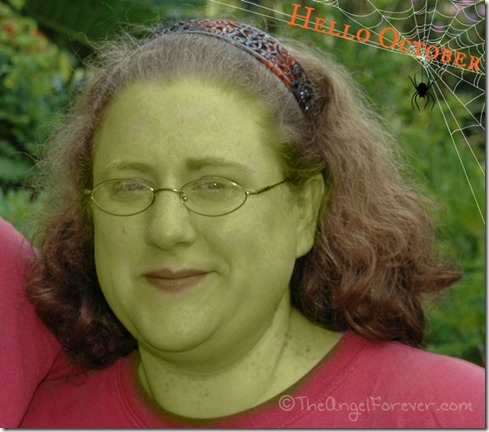 Many hours later, I was showing JSL what I had done to myself. He wanted to try to transform a photo as well. So I selected a photo of him with Baby No Name. He decided to go with the zombie look for both of them. This was our final product: 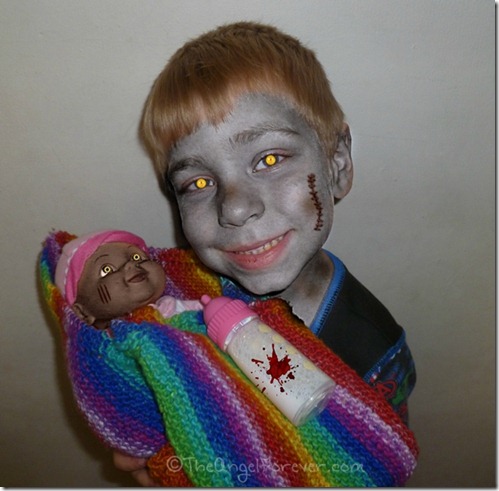 Then JSL and I wanted to have some fun creating something for NHL. He is a big fan of Hulk. The Demon option on PicMonkey did a great job with this. Thanks to the “gnarlifier” I was able to change up his nose a bit. In the end, this was what we came up with: 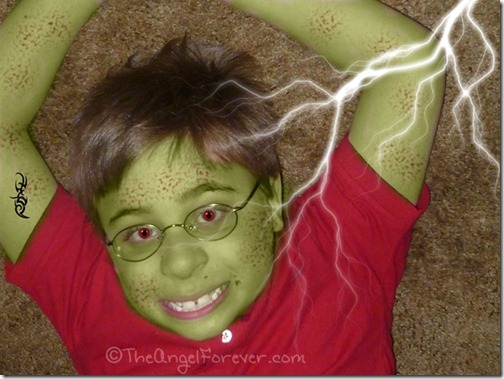 Of course, we could not leave TechyDad out of the mix. I guess I channeled my inner Twilight fan and had some fun. NHL thought the moon should be red in his photo and I agreed it made it look unique. 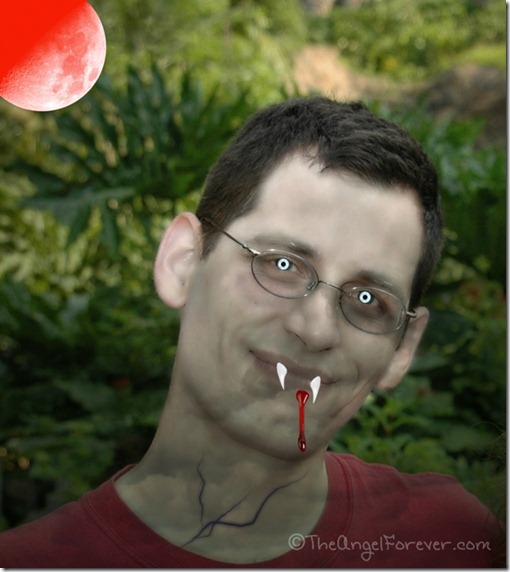 What can I say, it was fun and it let some creativity fly. So fess up. Have you made your own October creation with PicMonkey yet? If not, what are you waiting for?

Labor Day 2012 signifies the end of summer in our area. It is hard to believe that tomorrow both of my boys will be in school. One will be a fourth grader and the other a kindergarten kid. Over the weekend, I pushed passed this and enjoyed the last moments of the summer.

Views like the one below certainly helped to make me forget about a lot of things on my mind. 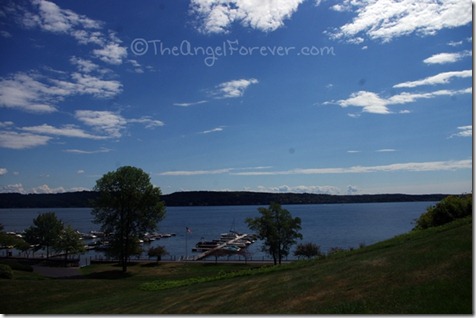 Seeing smiles on the boys faces in the pool, made my worries melt away. 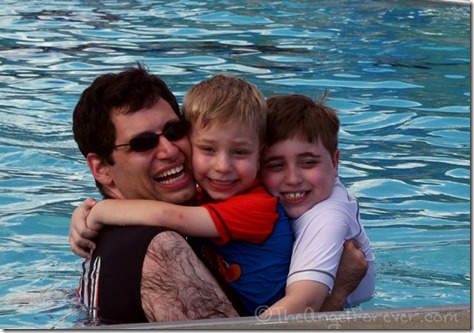 It was nice to sit in the sun and watch the kids play, explore, and enjoy the time without a care in the world. Just kicking my feet up out of the sand and watching them enjoy the fun in the sun. 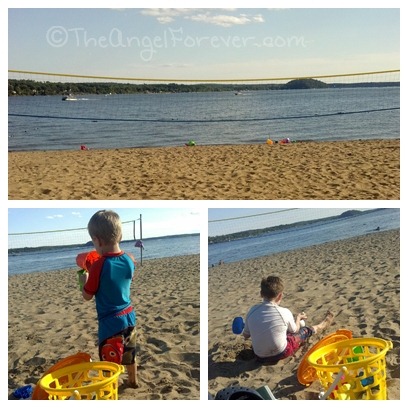 Today, we will spend a quiet day at home, enjoying time resting, remembering our special weekend with family, the summer we enjoyed, and gathering supplies for the first day of school.

There is something special about being with extended family. It isn’t every weekend that you get to see relatives from near and far. Yet Labor Day weekend seems to becoming more of a traditional time. Not everyone was able to make it to my aunt and uncle’s house at the lake, but still so many were here.

Though I had a headache when we arrived, seeing my boys with my niece and nephew made me smile. 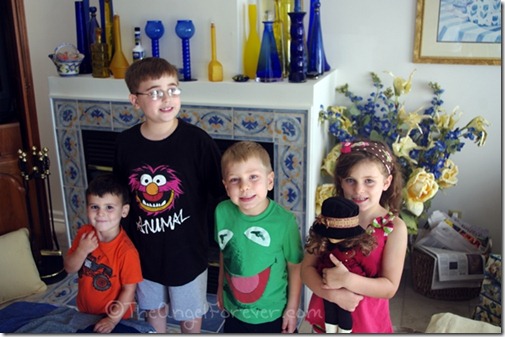 The kids had an amazing time running, playing, laughing, and being carefree. 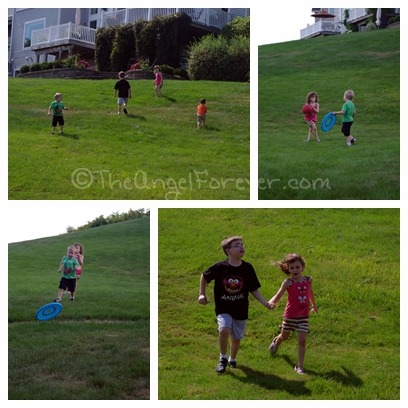 They stopped a few times to have lunch and celebrate NHL’s birthday with some Kermit cupcakes. 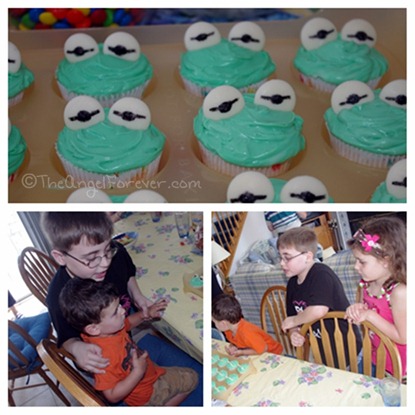 Then there was time at the pool, lake, and on the boat. Everyone split up to divide and conquer. I missed JSL on the boat, but heard all about how he was able to drive. 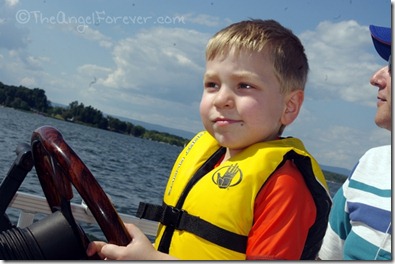 At the end of the day, my “little” cousins – who now live in other states and Israel – were giving the next generation moments they will never forget. It isn’t every day that you are able to have a parade piggy back style with a phones and cameras capturing every magical moment. 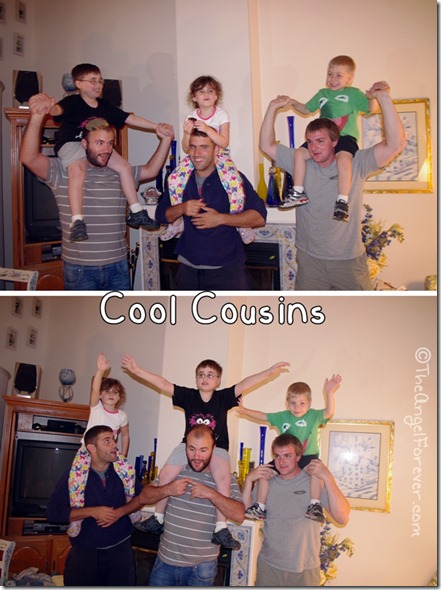 These are just some of the photos from a small part of the weekend. A weekend with family to relax, rest, and get ready for school. So many memories, so many moments, such an amazing time.