Books are very important in our house. Not only because I’m a teacher, but because JL and I both recall reading a lot when we were children.

We recently starting getting HBO free for a few months. Some of the mommies on a group mentioned a good show to DVR. So I started to DVR HBO Storybook Musicals. I had heard that there was "Alexander and the Terrible, Horrible, No Good, Very Bad Day" by Judith Viorst. This was a favorite when I was growing up. We missed that at first, but one of the first recorded was "Lyle, Lyle Crocodile" by Bernard Waber. NHL instantly fell in love with Lyle and wanted to see it over and over during those weeks that he was home with me

Then one day I saw a commercial for a show called George and Martha. I was curious, could it be THE George and Martha that I loved when I was a child? Sure enough it was a show with Nathan Lane as the voice of George based on the books by George Marshall. When I was a kid, we all used to fight in my elementary school to take out these books. I once again programmed the DVR to record these shows for NHL to enjoy. We all loved them. They were adorable and made the books come alive.

During a rainstorm last Saturday we decided to head to the bookstore to use up a gift card that NHL had received. We went in and saw a few books. Then I suggested looking for a Lyle the Crocodile book and possibly George and Martha as well. Here’s a photo of the books NHL picked out. 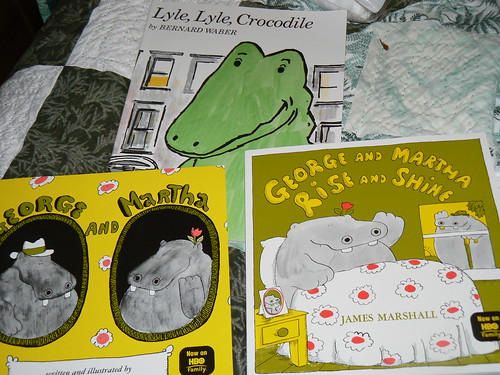 Since we bought these they have traveled all over in his backpack. He loves them and wants us to read them to him all of the time. It’s so nice when some books are timeless and can be shared with your children.