Is it right to sneak fruits and especially veggies into the food your childen eat?

There is a lot of buzz-ing about this topic all over the media and especially the internet. My opinion, you do what you need to do when you have a picky toddler that will NOT eat veggies. With all of the talk about hiding things in food for your children, we have gotten into the act. The Sneaky Chef (which we own) and Deceptively Delicious really made us think about things.  (Not going to touch the other controversy associated with these two books)

NHL, now 4, was an amazing veggie eater. How many kids do you know that would order broccoli and mushroom pizza? Unfortunately, this is not true anymore. Over the last year NHL has become very picky, especially with veggies, he still LOVES fruit and will gobble that up over almost anything. Just yesterday we had to stop him from eating all of the pomegranate seeds – he loved them!

Last week JL decided to make pancakes (a NHL favorite) and put in a secret ingredient.  The reason behind this was pancakes are not the best option when doing Weight Watchers (lots of points). So there was lots of fibery bulk with the mystery ingredient.The mix itself was wholegrain. He tossed in chunks of banana (NHL likes those) and the following: 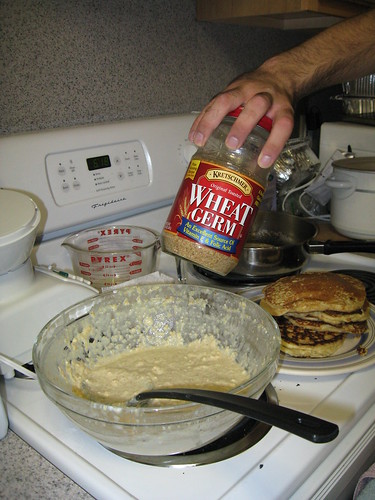 We were pleasantly surprised as adults with the results. We were full fast and had plenty of left overs. We even made NHL a special pancake with some chocolate chip tossed in. Here is the victim little guy trying them. 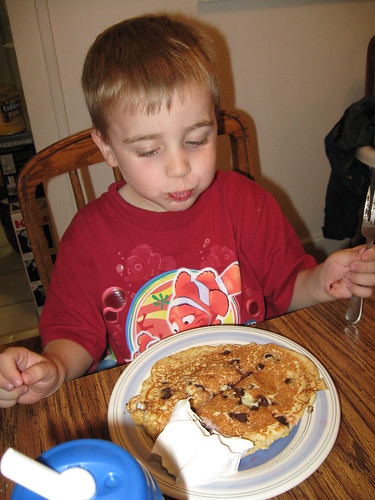 This week the plan is to try whole wheat pasta with special cheese sauce with veggies in it . . . .from The Sneaky Chef. It includes sweet potato or yams and carrots, as well as zucchini and cauliflower. We shall see how it goes.