At 12:40 I was heading out of the house with JSL to pick NHL up. As we were walking out the door my cell phone was ringing and it was his teacher. She said he had a splinter in his leg. So JSL and I went and found hysterical NHL there unable to walk or sit. We took him to the library since she said I needed to pull down his pants.

We got there and I was NOT ready for what I found. Staring me in the face was a 3 inch piece of wood basically sticking out of my son’s rear end!!!!  He couldn’t sit obviously, but even walking was an issue. The wood was stuck right in the crease of the leg where it meets your butt cheek.

I took a deep breath and grabbed the wood and yanked it out. NHL was flipping out, for obvious reasons. His teacher then went to get an alcohol wipe and band-aid since it was bleeding.

I looked at it again now and am not able to tell if more is under the skin. It is so swollen and red from the puncture. JL called the doctor for instructions on what to do this weekend.

There are no photos of it until we got home, but I did take them because it was HUGE. I still do not understand how there is nothing on the pants.

This is a close up of the charming item: 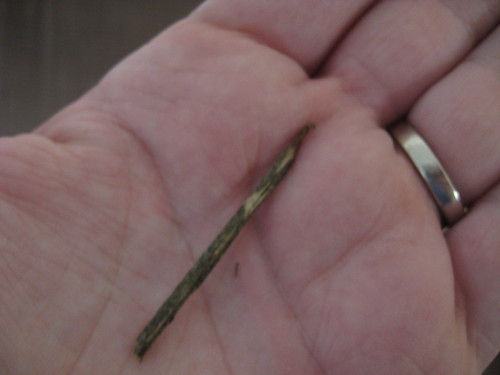 Here are two that put the size in perspective: 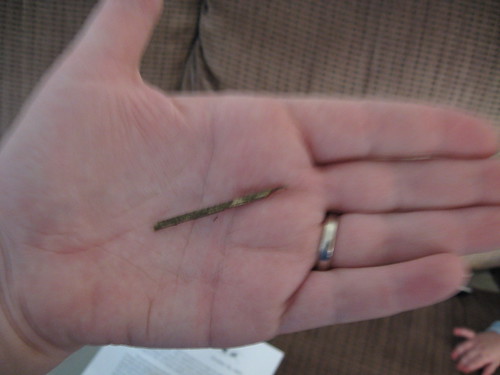 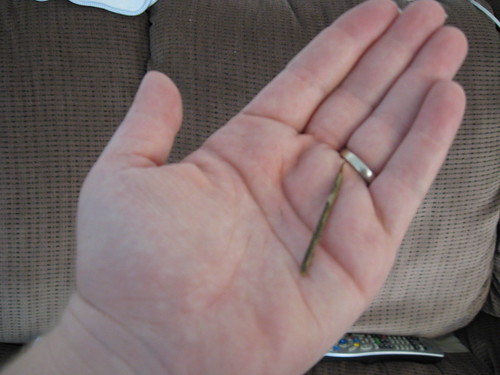 Oy vey seems about all I can say.

« A Wiggly Recap with LOTS of photos
Secret ingredient foods »